I was fortunate to get a day to hike with my oldest son today.  He was flexible on where to go, but he voted for a high peak.  I chose Mount Marshall from Upper Works via the Calamity Brook Trail and the Herbert Brook herd path.

We met in Newcomb and got started around 8 AM.  It was 6 degrees at the start and there was a group of folks from Pennsylvania camped right in the parking lot at Upper Works.  Only one other car was there.

I was pleasantly surprised the the moderate winds that were forecast never materialized.  Even on the summit the winds were almost calm.

We moved at a decent pace, but we were talking and not racing against the clock.  Our first stop was at the Henderson Monument, then Flowed Lands

We opted not to test our luck crossing the ice on Flowed Lands.  We took the scenic route around the lake.  Once at the north end, we stopped at my adopted lean-to at Herbert Brook.  I place a new register there.

Next we walked down to the water's edge.  We had a fine view of Iroquois, Algonquin and Colden.


The Herbert Brook herd path was broken out and was good and solid.  We continued onward and upward with our microspikes.  The broken out path generally followed the summer herd path with only an occasional small meander.

Once we reached 3500', we began to see snow in the trees.  With the blue skies and white trees and sunshine, it couldn't be nicer. 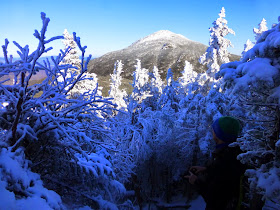 We paused at the summit for pictures then we wandered over to the southern edge of the summit to take a look at the Santanonis. 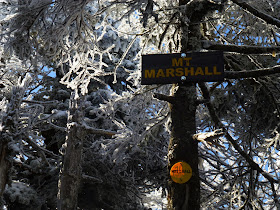 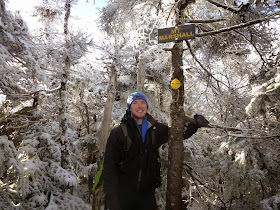 The viewpoint for the Santanonis was basking in sunshine and we took full advantage of it.  We were there for awhile; still surprised that the winds were so light,  Zack had an apple and I took more pictures (of course).  It was exactly noon. 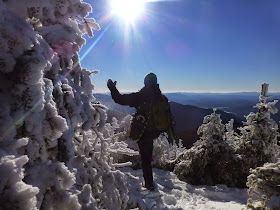 We decided to return via the same route and stop back at the Herbert Brook lean-to for lunch.  WE had even more sunshine there on the 2nd visit.

On our way out, we came across the group that had been camped at Upper Works.  They were headed for Lake Colden as a base for a climb of Mount Marcy.  Back at Upper Works there were still only the same two cars parked there.  The parking lot was sheer ice.  We had parked in one small spot was not ice covered.  It was 3 PM and time to head out, but not after a nice day of hiking and conversation.