This hike was a bushwhack hike in an area that receives very little hiking traffic, but I post most of my trips as a record for myself as much as for others.  Perhaps someone will find this useful.  I am always surprised at what posts interest people.

I was looking at Google Earth in the Schroon Lake area and noticed some potentially interesting hills in the Vanderwhacker Mountain Wild Forest.  The only public access is from Charlie Hollow Road, off of Trout Brook Road in Schroon.

I had previously hiked Merrill Hill in the same area, and that had been a nice hike to a view.  This time I would hike south from Charlie Hollow Road, cross Alder Creek (if possible) and climb to the western end of the Green Hill ridge to a rocky outcrop.  The true summit of Green Hill lies near the eastern end of the ridge and is on private property.  There are other hills in this area that I'll explore next time I come here (Pine Hill and the un-named hill immediately east of Pine).

Leesa and Rev came with me on this hike.  We found the woods to be generally easy to negotiate, and had no problem finding a place to cross Alder Creek.

Once on the south side of the creek, we skirted around a ridge that lead to Pine Mountain, then began climbing towards the Green Hill ridge.  We passed flagging in several different spots that was probably left by hunters.

We reached the ridge right about in the middle and proceeded west.  We passed several viewpoints along the way.  The was a glimpse of the southern tip of  Schroon Lake as well as a nice view of Loon Lake in Chestertown.  To the north, Hoffman Mountain and Texas Ridge were easily visible.

The ridge was an easy walk until just before the western end where it got a little more rugged.  The tip of the ridge did indeed have the open rock that I had seen on Google Earth.  We stood on the rock outcrops and enjoyed nice views westward. 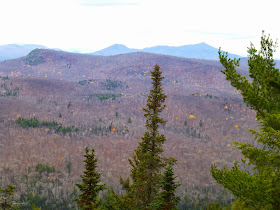 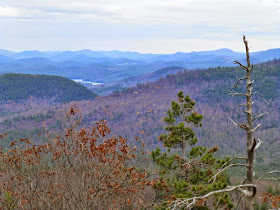 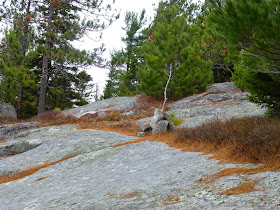 To return, we dropped off the ridge near the western end and worked our way NE to complete a triangle of a hike south of Alder Creek.  Once across the creek we eventually rejoined the early portion of our route and returned to the car.