The 2nd hike of our vacation was another "lakes" hike.  This time our destination was Ice Lakes Basin, located a couple miles NW of Silverton, CO.  Leesa said that we were "Lake Bagging", instead of peak bagging.  That was OK with me.  We were climbing to high alpine meadows and lakes and the scenery was unbelievable.

This hike began at a trailhead located at Mineral Spring Campground.  We were still camped at the Amphitheater Campground in Ouray, but we made the hour drive to the trailhead and had an early 7:45 start.   As we were getting out of the car, we were surprised to see the german couple we had met the day before at Blue Lakes.  They were apparently lake bagging also.  We talked for several minutes and then we started on our hike.  The elevation at the start was approximately 9800'.

After an easy 75 minutes of hiking, we were in the lower Ice Lakes Basin.  The trail doesn't approach the lower lake and we didn't leave the trail for a closer look, but could see the lake from the trail.  We could also see several tents set up in the clumps of trees dotting the basin.

At the far end of the basin we followed the trail as it wound it's way up the headwall to reach the upper basin.  At the top, we found ourselves a short stroll from Ice Lake, a beautiful crystal medium blue lake at an elevation of about 12,300'.

Leesa and I found Ice Lakes Basin to be an amazing place.  Our jaws dropped as we looked around. What a great high alpine plateau, and what great lakes!  We wandered past Ice Lake, the bluest of the 5 lakes we saw in the vicinity, and then headed over to Fuller Lake. 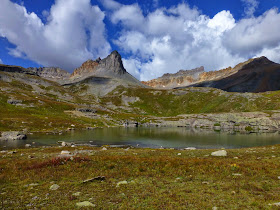 Fuller Lake didn't have the beautiful blue color of Ice Lake, but it did have an interesting collapsed shelter at the edge of the lake.  It was as if a windstorm had blown out the sides and the roof just dropped.  Looking at the collapsed structure made us more fully aware of how harsh the weather could be at this location.   This was the highest elevation of our hike at approximately 12,600'. 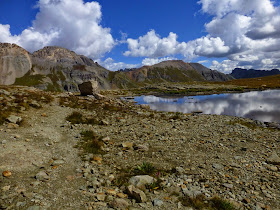 From Fuller Lake, I eyed the Golden Horn, sizing it up for a possible climb.  As with the day before however, afternoon clouds were quickly coming in and I wasn't comfortable with what the weather would be in the next couple hours. 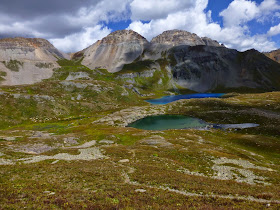 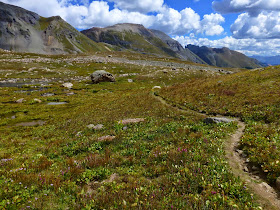 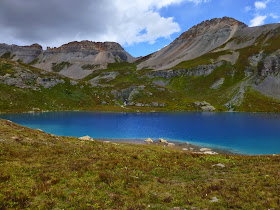 We made our way back towards Ice Lake.  Shortly it began to rain and hail.  The storm looked small however, and Leesa wanted us to head over to Island Lake.  We had read from others that they considered Island Lake the prettiest of them all.

We got halfway over to the lake when we encountered a tricky steep rock and gravel slope,  Leesa chose to make her way back towards Ice Lake, but encouraged me to finish the trek to Island Lake. She would wait for me at Ice Lake.

Ice Lake was indeed awesome.  It not only had an island in the center of the lake, it had dazzling blue water and was surrounded by a tight cirque of mountains.  I stayed for 10 minutes or so and snapped many pictures before heading back to Leesa.  It looked as if more bad weather was arriving. 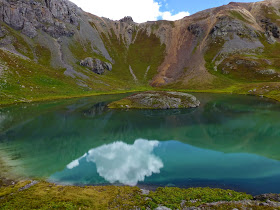 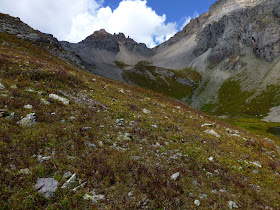 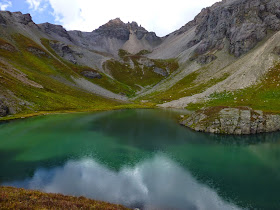 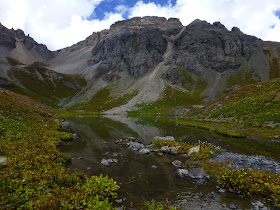 I found Leesa back at the outlet from Ice Lake.  The weather had blown past and was clearing once again.  We saw our german friends again and answered their questions about Island Lake.  We soaked our feet in the cold water of the Ice Lake outlet.  From there, it was regrettably time to hike out. 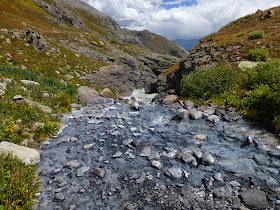 The sun continued to come out as we headed out, and it became quite warm.  It was an enjoyable retreat as we ended a wonderful day at an awesome spot.  Once again for the 2nd day in a row, we were back at the car at 3 PM.  We finished the day by going into Silverton to look at the town before returning to Ouray and the Amphitheater Campground for the night.
﻿