My wife Leesa chose today to try and finish her ADK 46 high peaks.  She had one left.... Couchsachraga, a straggler that didn't get climbed previously when we did Panther and Santanoni on a winter hike.  She had saved Couch because she feels it gets a bad wrap.

We got an early start and were on the trail as it was getting light at 6:30.  We had expected to see a partly sunny day with wind and temperatures in the high 50's.  We got 2 out of 3.   The sun never did show.  We were shrouded in fog from a low cloud all day.  Visibility was perhaps a quarter mile at best.

This was Leesa's trip and we did things her way.  She wanted to hike to Bradley Pond and take the herd path up to Times Square.  We followed the jeep road from the trailhead to the turnoff at approximately 1.75 miles.  This was an easy 35 minutes.  Next we followed the blue trail and came to the Santanoni Express herd path at 3.5 miles and 1.5 hours.  At Bradley Pond, and the turnoff for the herd path to Times Square, we ran into a group of about 8 young people.  I guessed that they were perhaps from a college outing club.  We ended up seeing them 3 other times during the day.

We crossed on the beaver dam by Bradley Pond and began our climb to Times Square.  About 1.5 hours later we stood at the square.  We were still shrouded in fog, so Leesa chose to skip Panther and head straight for Couch.  We could always grab Panther later in visibility improved.


The trail to Couch was a bit sloppy, and of course the Couchie swamp still exists.  We managed to to get ourselves across intact.  Leesa led the way as we went up over a false summit and on to the true summit.  She threw up her hands and then grabbed our dog Rev and gave her a hug while I snapped pictures.  While the 46 had not been a goal that she was feverishly working on, she did come around to making the decision to finish.  She looked mighty happy on the summit. We ducked off the summit for a snack before continuing on.  As we headed back towards Times Square, we came across a 2 men and woman hiking to Couch.  The woman said she was going to finish her 46 on Panther after she tagged Couch.  We wished her well and headed back uphill.


Eventually, we made it back to Times Square and it decision time on where to go next.  There was still no visibility so Leesa elected to head towards Santanoni and then down the Santanoni Express herd path.

It was nice to have the smooth walk out on the jeep road at the end.  We got back to the car at about 6 PM ready to head for Schroon Lake and a hot dinner.  Leesa is a 46er, and I'm proud of her accomplishment.  She's been a trooper.  Almost half her 46 were done in the winter; sometimes in temperatures as cold as -16 degrees!  She has no intention of finishing a winter 46 though. 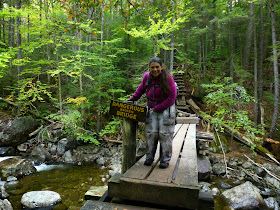