I've been meaning to take this short bushwhack to Little Buck Mountain in the Lake George Wild Forest for some time.  From the summit of Buck Mountain you can see a little bit of open rock to the north on the summit of Little Buck and it piqued my interest.  A couple years have passed and I finally got over there on Wednesday after work to check it out.

From the Hogtown trailhead, I continued to drive down the steep portion of Shelving Rock Road for a couple miles until I wasa halfway down to the lake.  I parked at a little pulloff (big enough for one or two cars) that was next to a utility pole.  This was may starting point for my bushwhack.
The woods were quite open.  There was really no bushwhacking involved; just some route finding.  The first 10 minutes I was climbing through open hardwoods, then the forest switched to a mix of pine and hardwood.   There was a little blowdown higher up, but it was easily walked around.

After only 25 minutes, I was up on the grassy summit ridge.  I came across various cairns showing evidence of previous explorers to the area.   ﻿

A large rock outcropping exists at the true summit.  There are no views at this location, but the ridge walk is nice and open.﻿


The west end of the ridge terminates at a fine ledge that offers outstanding views of Lake George (as seen in the pictures below).  What a great spot to reach after only a 30 minute walk!
﻿

This was really a great spot.  I"m sure very few people ever go here, but it's not hard to get to.  The only difficulty is that there is no trail system to follow to find it.
﻿


Rev nosed around and I did too.  We wandered around the expansive open area and I just felt like I ha come across a really nice, rarely explored spot.  ﻿ 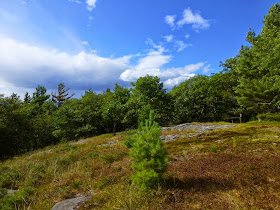 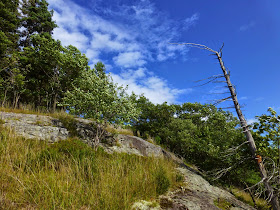 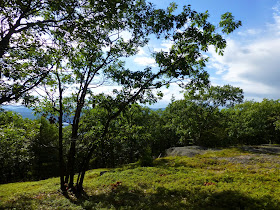 After I had spent enough time on the ledge, we looped around and down back to the car.  The entire loop was only an hour and 20 minutes, including my time on the ledge.  What a great walk to a view.
Once back on Shelving Rock Road, I continued down to the bottom of the road and Rev and I walked some of the old carriage roads running along the lake beside Shelving Rock Bay and Log Bay.
Not a bad way to spend a couple hours after work.
﻿