I find this to be a great time of year to do bushwhack hikes.  The leaves are not yet on the trees, and trails are muddy or icy.  A great time to stay off the trails and wander.
I'm now working on climbing the ADK hundred highest peaks so I decided to climb Lewey Mountain  last Sunday.  Lewey is # 69 on the hundred highest list with an elevation of  3750'.  Lewey is best accessed from the Sucker Brook Trail off Route 30, just south of Indian Lake.  The trailhead is at the entrance to Lewey Lake Campground.
The Sucker Brook Trail is a connector trail that connects to the Northville Placid trail by the Colvin Brook lean-to on the Cedar River.  It's a trail that doesn't appear to see a lot of use, but it's a nice trail.


After 1.5 miles, I came to a stream crossing that had no bridge or rocks to hop across on.  The water was a couple feet deep.  I went upstream a couple hundred yards until I found a downed tree to cross on.
﻿


Once beyond the stream crossing, I continued on the trail until the 2.7 mile point where I reached the height of land at the SE approach ridge to Lewey Mountain.  It was here that I left the trail to begin the climb to the summit.  ﻿


It had been raining lightly all morning and the temperature was about 45 degrees when I began.  When I reached 2800', I reached the snow line where I began to see patches of snow.  By the time I reached 3200', the snow was getting deeper and the precipitation had changed to snow as well.
﻿


Things of course looked quite different once I was in the snow.  It was quite pretty.  It was also quite windy. 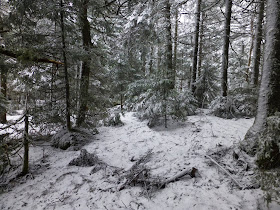 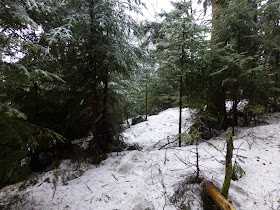 The snow was about a foot deep on the summit ridge, except where the wind had blown it off. 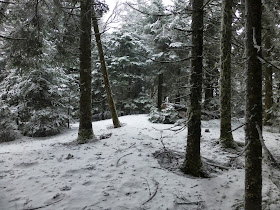 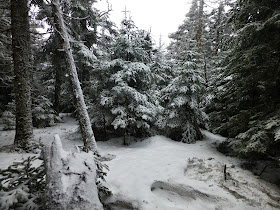 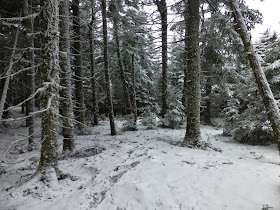 The summit is in the trees and offers no views.  I suspect even if it was not snowing, I wouldn't have had any views except one point lower down on the summit ridge.  I decided to take a different route down and follow the southern ridge to the Sucker Brook Trail.
﻿


At 2800' I left the snow behind.  The ra﻿in had stopped however and I actually saw a few glimpses of the sun.  I continued south until I hit the Sucker Brook Trail once again.  From there I followed the trail back to Route 30.  It had been interesting to go from the wet rainy climate down low to the snowy windy summit and back.
Hike Stats:
Hike Distance:  8.7 miles
Hike Time:  5.5 hours
Total Vertical Gain:  ~ 2000' 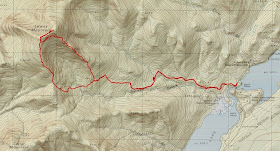 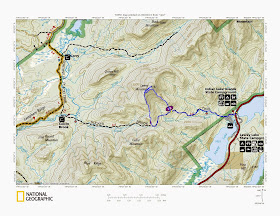