I used to access the Adirondack High Peaks fairly regularly from the Ausable Club (AMR) off of Route 73 in Saint Huberts.  Since Leesa and I rescued a dog, Rev, from a shelter however, this option has been off the table.  Dogs are not permitted anywhere on AMR grounds.

On this particular weekend, we left Rev with her trainer/day care facility so that we could make progress on Leesa's 46 high peaks and also participate in the ADK High Peaks Foundation Winter Gathering.
Leesa needed all the peaks best reached from the AMR (Dial, Nippletop, Colvin, Blake and Sawteeth).  We chose Colvin and Blake and signed up with the Foundation to climb them both for their fundraiser.
The weather was cold but clear.  We got on the trail around 7 AM and signed in at the register.  We soon caught up with 2 women who were also headed for Colvin and Blake.  We continued to see them several times throughout the day.

We chose to take the Gill Brook trail rather than staying on the lake road until the Gill Brook cutoff.  As we left the AMR property and entered state land we passed the 3 designated campsites.  No one was camped at any of the sites, but there were remains of snow walls at the 1st site on the right.  I suspect these were built to keep the wind away from the tent and add a little warmth.
It took us about 2 hours to get to the split for Colvin and Nippletop.  The snow was perfect for snowshoes.  It was packed down but not icy.  I remembered that the final steps before the summit of Colvin (the Colvin Step) could be tricky so I had a rope with me in case I needed to pull Leesa up and over the step.  We did use it, both on the Colvin Step and on the snow covered ladders on the south side of Colvin.   ﻿

After the Colvin Step, we were on the summit and we stopped to take a picture of us both.  The skies were gray, but visibility was good.  We could see the whole Great Range, Giant and Rocky Peak, Dial and Nippletop.

We continued on towards Blake Peak and used the rope again on the 2 snowed in ladders as we approached the Colvin/Blake col.  The climb of Blake was much nicer than my previous ascents.  There was no mud, no ice, just nice climbing snow.
﻿ 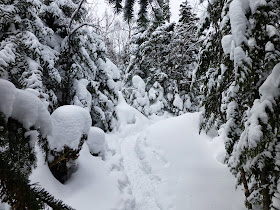 While climbing Blake we saw two different lone guys who were on there way out.  There was some breeze at the top of Blake, but we were mostly sheltered by the trees so it wasn't too bad.
﻿

On our return, we intended to head over to Fish Hawk Cliff and Indian Head, but the short post-hole track we followed soon ended and there was deep unbroken powder after that.  Normally I wouldn't mind breaking a little powder, but on this day, we wanted to make quick tracks out to get over to the Winter Gathering.  We turned around and got back on the main trail.
﻿ 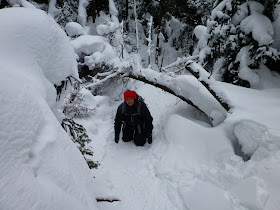 At the Gill Brook Cutoff, we took the cutoff to hike a different piece of trail before returning to the lake road.  As usual, the lake road felt much longer on the way out.   Leesa now has climbed 37 of the 46 ADK High Peaks.  She hopes to finish the remainder this year.
﻿

While on the lake road, the blue skies began to come out and we saw some sunshine as witnessed in the picture below, taken at the Ausable Club on the way out.
﻿ 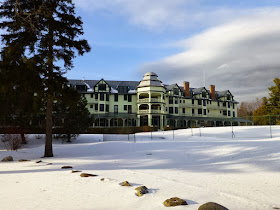 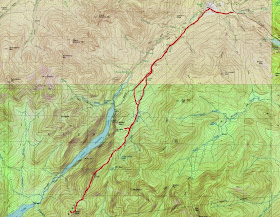 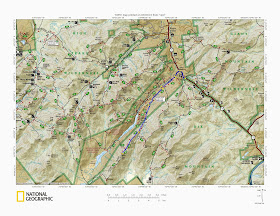