Last night I decided that today was going to be my first day out xc skiing this winter.  There wasn't enough snow in Schroon Lake to ski, so I went to Intellicast to check the snow cover in the western Adirondacks.  I wanted to see how far west I had to drive  to find sufficient snow.  It looked like Blue Mountain Lake had about a foot of snow so I planned a route to Lower Sargent Pond in the Sargent Ponds Wild Forest (just west of Blue Mountain Lake).

I just wanted to go out for a half day to get my ski legs under me.  I left the house about 9:30 and was out to Blue Mountain Lake around 11.  I turned off of Route 28 onto North Point Road to head towards my trailhead.  As I drove down the road, I came across a motorist driving a SUV pulling a small utility trailer that had slide off the road into a fairly deep ditch.  He had been stuck there for 20 minutes and there was no getting out.  The ditch was about 5 feet deep.  I pulled up to him and discovered that I was the first car to come by since he went off the road.  I offered to give him a ride to his house 4 miles away.  He got in the car and we only drove a short distance before we came to his wife driving up the road.  I stopped and let him off to go with his wife, and I wished him good luck.

After another mile, I came to my trailhead, only to find there was no place to park.  I continued on 1/2 mile to a pulloff for a canoe carry to Forked Lake and I parked there.
﻿


Since I was at the canoe carry, I started out by skiing the short trail to Forked Lake.  It was about a half mile long.


I reached the lake, then turned around and went back to the car.  I then skied east on North Point Road for about a half mile to my trailhead for Lower Sargent Pond.  Along the way I crossed the Raquette Lake Outlet Bay.  Once on the trail, there was about a foot of new snow and it was untracked.  I would be breaking trail.  It wasn't hard since the snow was light and fluffy. 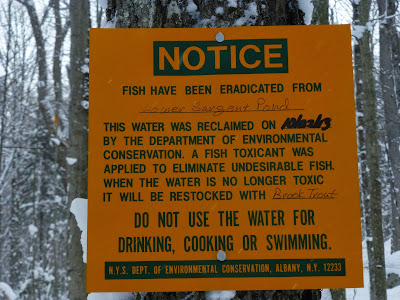 The first part of the trail is mostly hardwoods with slightly rolling terrain.  There were a few small drainage crossings that weren't frozen.  I had to carefully get across them so my skis wouldn't get wet and freeze.
About halfway to Lower Sargent Pond I passed Grass Pond on my left.

Farther on, I came to a trail junction and turned right to head for Lower Sargent Pond.  I chose this pond since it had a lean-to I could ski to and stop there for a snack. 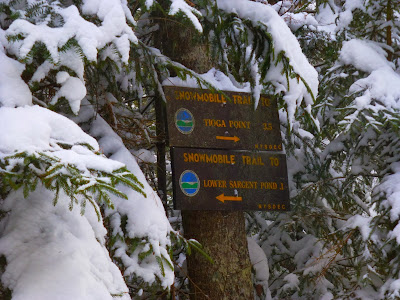 Just before I got to the lean-to I went through some pines that were encroaching on the trail and I got covered in snow.

I saw 4 boats in the vicinity of the lean-to; 3 canoes and a rowboat.  The lean-to is sited on a nice point with a fine view of the water.  My dog Rev and I stopped to have some food.  We didn't stay long though.  The wind chill was around zero and it felt like it. 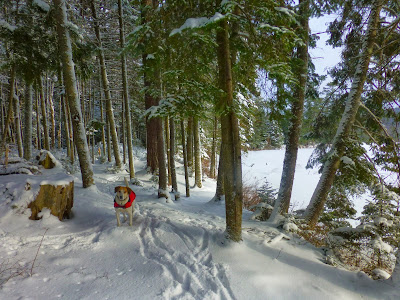 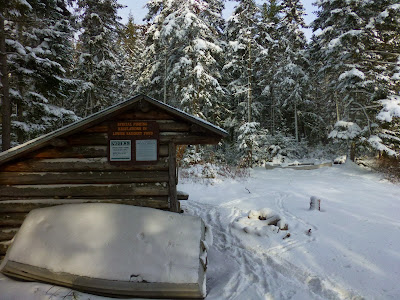 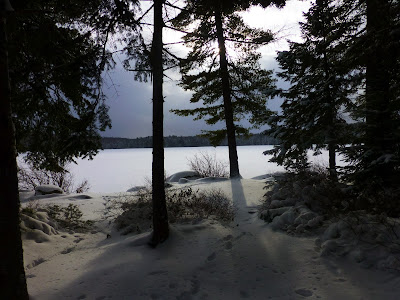 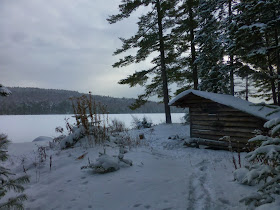 Once fed and nourished, we reversed course to go back to the car.  I skied a little faster since I had gotten a chill while eating.  It was also easier on the way out since I got to ski in my tracks.  In unbroken snow, an out and back is nicer than a loop hike.  You get a chance to enjoy the fruits of your trail breaking effort.


The temperature was dropping as the afternoon wore on, but blue skies appeared.  We were back at the car at about 3:30 and I didn't feel too tired from my first time out.  That's a good sign.  Snow is on the way tomorrow, so I'll be back out again this weekend I'm sure.  Good to be out on skis again.