If you are looking for a relatively easy bushwhack to an open Adirondack summit, consider Peaked Hill in the Pharaoh Lakes Wilderness, just west of Rock Pond.  The goal for me on this gray day was to do a little bushwhack exploration.  I had heard that Peaked Hill had a really nice summit, and I had eyed it during a previous hike to Rock Pond.
Walking was tough due snow conditions.  There was about 4" of crusty snow on the ground.   I broke through with each step.  Snowshoes might have been better, but on a bushwhack, snowshoes don't always work so well.  Once I got in the woods a little bit, the snow wasn't quite as crunchy.
I started by hiking from Putnam Pond to Rock Pond via the Clear Pond Trail.  At Rock Pond I turned north to a height of land, then walked west on the ridge of Rock Pond Mountain until I reached the true summit.  The woods was open throughout this hike allowing for easy movement through the trees.  There were filtered views of Rock Pond to the south.
﻿ 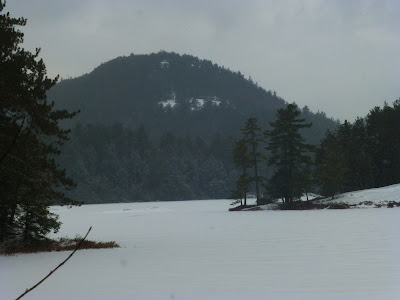 From Rock Pond Mountain, I decided to head north to take a look at Gooseneck Pond.  The land along the northern tip of Gooseneck Pond is private property but the remainder of land abutting the pond is state land.
I made my way towards the peninsula on the inside of the dogleg of the pond.  At the south shore I had my first glimpse of the peninsula and I saw an incredibly large rock formation at the water's edge.  Adjacent to that was a long rock point with a steep east face.  I had to walk several hundred feet inland to be able to get up on the rock and walk out to the point.  It was quite an impressive extension of rock.
Even more impressive was the tall rock face immediately to the west.  My dog Rev and I climbed to the top, but didn't go near the edge due to the slick ice surface.  This place must look great in the summer.  I'll have to go back to see.  ﻿


The water was covered in snow and ice, but it was not thick enough to trust walking on it.  I made my way back around the pond and headed south towards Peaked Hill, bypassing Rock Pond Mountain on the west.  Rev and I scouted and found a means to cross the Rock Pond outlet brook and soon we were climbing the open woods on the eastern flank of Peaked Hill.  About halfway we passed several large sections of exposed rock.
In minutes we were on the nice open summit.  There are great views of Pharaoh Mountain, Potter Mountain, Rock Pond and much more of the surrounding area.
﻿ 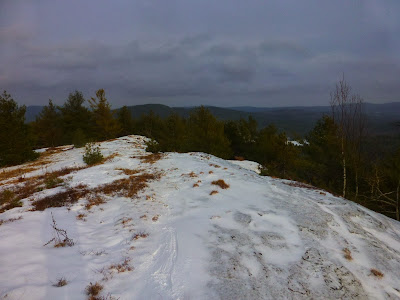 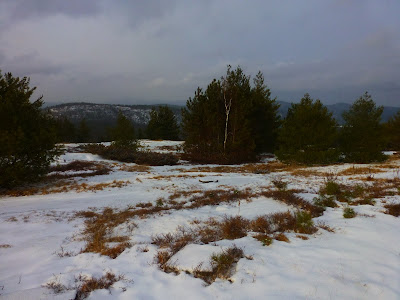 I left the summit at 2:30 PM and was able to make it back to the car by 4:30.  On the way back, I took the South Rock Pond Trail to the Clear Pond Trail, stopping at both the Rock Pond lean-to and Little Rock POnd lean-t0 on the way out. 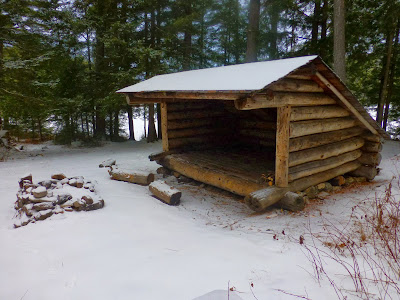 Soon access to this area will probably be a little more difficult, since the campground road isn't often plowed in the winter.  That adds a couple miles each way onto the trip.
Hike Stats:
Hike Distance:  10.2 miles
Hike Time:  6 hours
Total Vertical Gain:  ~2000'
﻿ 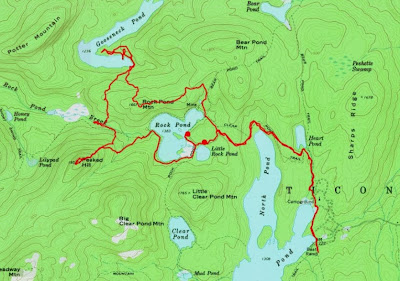