On Saturday, I found myself doing house projects in the morning, but by lunchtime I was free.  I pulled out my map and looked for a trail that I hadn't been on.  The Short Swing Trail off of Route 74 in Ticonderoga caught my eye.  Leesa and I threw our gear in the car and off we went.
Four pickup trucks were in the lot as we pulled in ... most likely hunters.  We put on our orange and put Rev's red coat on her.  We were expecting some rain so we brought our rain gear.
The first thing I noticed about this trail was how smooth it was.  It would be a great xc ski trail, at least for the first 2.4 miles to the Tubmill Marsh leanto.   There is a nice long gradual ascent followed by an easy descent to the leanto.


It was 60 degrees out and plenty warm for November 2nd.  I was hiking with a T shirt on.  The rain sprinkles early on disappeared and we got breaks of sun as we reached the leanto.  We saw our first hunter near there.  We also saw a group of 4 hikers.
Tubmill Marsh is a nice leanto.  It is in good shape and has a nice fire ring in front.  There is no running water nearby, but a nice location none the less.

We really had no agenda for this hike.  We were just going to hike until we felt like turning around, depending on weather.  Since it was getting nicer out, we continued on towards the Lilypad Pond leanto; another 1.1 miles down the trail.  This section of trail was a little rougher, and would be tougher section of trail to ski.  Still not hard, but not like the first couple miles. ﻿

When we reached Lilypad Pond leanto we stopped for some food and drink.  The sun had disappeared and a very light rain was coming and going.   ﻿ 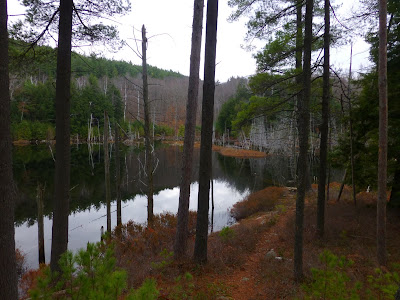 Leesa and I discussed whether to head east to Rock Pond, SW to Crab Pond, or turn back at this point.  Leesa voted to head to Rock Pond and I didn't have a preference, so that is the direction we headed.  Rock Pond is 1.1 miles east of Lilypad Pond.
We had just passed a marsh on our left, and were about halfway to Rock Pond when I heard flowing water.  Out of the corner of my eye I could see a small 6 foot waterfall on my left.  We left the trail to go look it and soon discovered that this was just the lower falls below a much bigger upper falls!  The upper falls is probably 25-20 feet high.   What a pleasant surprise.  My pictures don't do it justice.  This falls is worthy of being a destination in itself.

This would really be a fun spot in the summer.  I had no idea this falls was here.  There was no indication on the maps that I had.  I bet it flows pretty good in the spring.  My pictures didn't come out that good (my fault, I had the setting wrong when I took them).  ﻿ 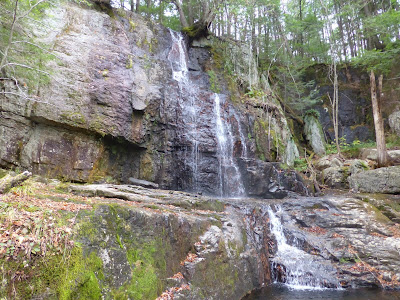 We spent about 30 minutes here at the falls just looking around.  You can easily walk on the ledge at the bottom of the upper falls.  There are nice pools of water below each falls.
﻿ 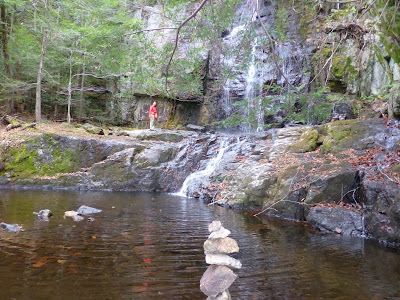 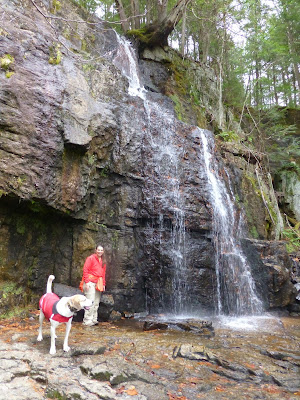 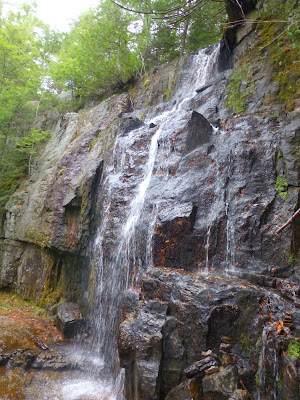 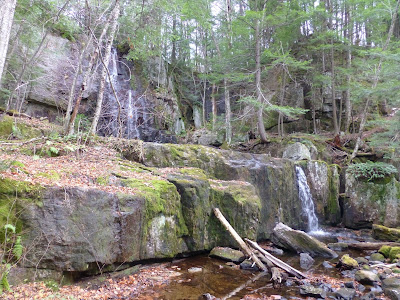 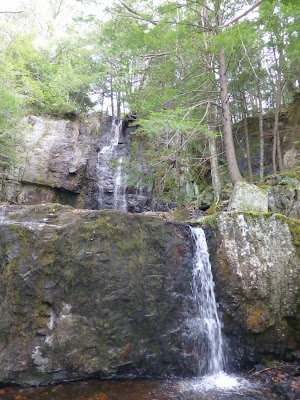 After leaving the falls, we walked the remaining .6 miles to Rock Pond.   Trails go around both sides of the pond and Rock Pond is a pretty pond, but it was time for us to turn around.  We had a couple hours t get back to the car before darkness would begin to set in.
﻿ 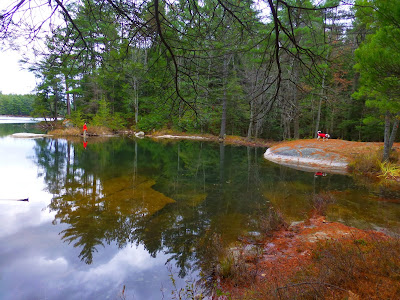 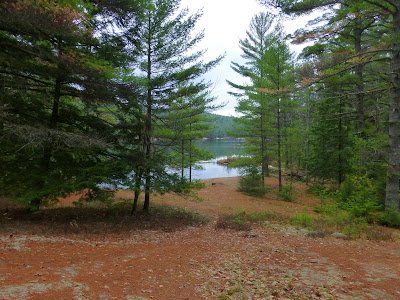 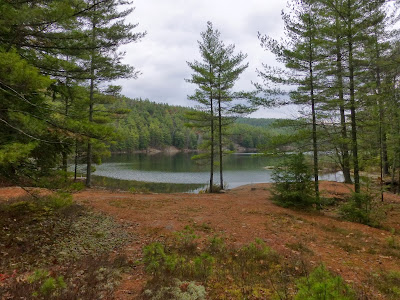 On our way back, it began to rain more steadily, but then stopped as we re-passed Tubmill Marsh leanto.  We got back to the car just before 5:30... at just the same time as the hunter we saw near the first leanto.
It had been a pleasant walk and the waterfall was a nice spot.  I may be back to this area on skis.
Hike Stats:
Hike Distance:  9.2 miles
Hike Time:  3.5 hours
Total Vertical Gain:  ~ 1200' ﻿ 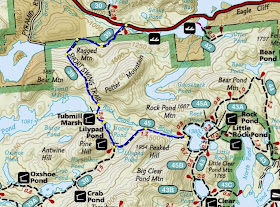