I've been plugging away at bushwhacking all the named peaks in the Dix Mountain Wilderness Area and I've been making good progress.  I've also climbed a bunch of the unnamed ones that I can tell have good views.  Fall is definitely the best time to do this, so I planned another one for today.
The Big Marsh Pond area can be accessed either from Route 9 in North Hudson, by utilizing a culvert that passes under I-87, or by parking at Palmer Pond on Blue Ridge Road and hiking north from there.  I chose the Palmer Pond Route since you have to wade the Schroon River from Route 9.
I got a really late start today.  I wasn't on the trail until 11:15.  I was hoping I still had enough time to hike north to the Big Marsh Pond outlet drainage, then follow it to Big Marsh Pond.  If all was going well, I would continue on and hike to Marsh Pond Mountain before circling back to the car.
There is supposed to be a small point on Blue Ridge Road in the vicinity of Palmer Pond where state land touches the highway.  I didn't see any state land signs, but I found an area, where I thought the state land was and it didn't have any posted signs.  I entered at that point and headed almost straight north.  For the first 10 minutes I was walking through a messy logging area.  Perhaps I was in the wrong spot.
﻿ 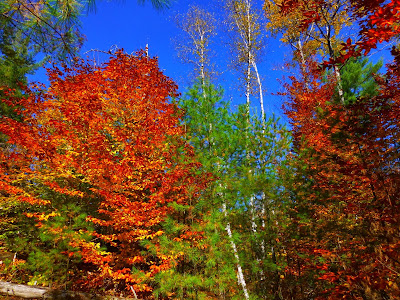 I stayed east of a small unnamed peak and soon was at the drainage of Big Marsh Pond.  From here, I just stayed on the north side of the drainage and headed west.  About halfway to Big Marsh Pond I passed an area where the drainage was a little bit wider and pooled up a little.  There was also a big prairie type grass area adjacent.  On the slope above, where I was, there where some nice pines and glacial erratics.
﻿
After that, there was nothing remarkable until I reached Bid Marsh Pond.  This pond had more water in it than I was expecting.
﻿ 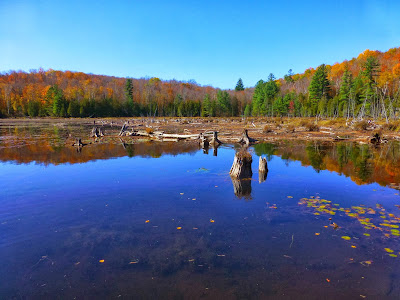 It had only taken me 2 hours and 15 minutes to travel the 3.5 miles to reach Big Marsh Pond so I decided I had enough time to zip up Marsh Pond Mountain.   It was only a mile to the summit from the pond.
As I climbed, I immediately left the pines and entered hardwoods for the climb﻿ up.  Before I reached the summit ridge I had to bypass a band of cliffs.  Nothing terribly hard.  Soon I on the southern tip of the ridge where I had great view of Big Marsh Pond and Little Marsh Pond.  Rev and I stopped under the shade of the tree to cool down and have some food.  She also drank over a liter of water.  It was hot climbing the southern face of the mountain with the sun beating down.  I let Rev cool down before continuing.
The actual summit was in the trees.  Actually it was a double summit and both were in the trees.  When I reached the northern summit I decided to continue a loop instead of going back.  I headed southeast, instead of southwest from where I had come.
﻿


On the way down I was just making time.  I angled my way down the slope until I was back near the drainage.  I followed the drainage for a distance, then took a dogleg to cut the corner from the way I came in.  This sent me up and over an unnamed hill which had a really nice open rock summit and some great views. 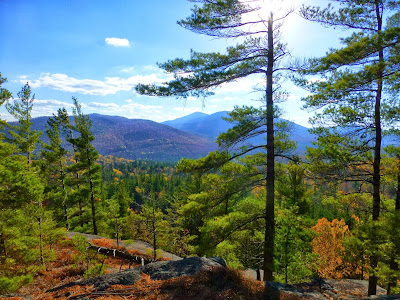 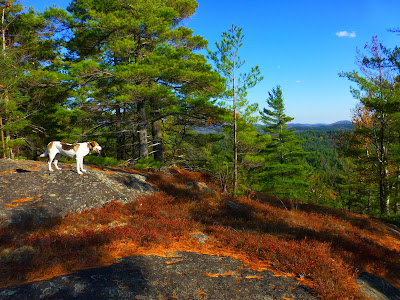 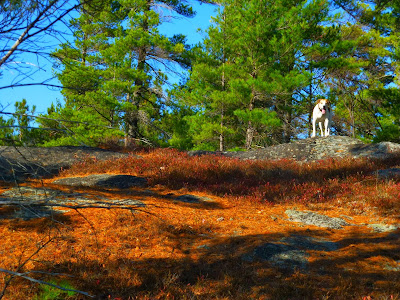 It had taken me 3.25 hours to reach the summit, but I got out in 2.25 hours by taking a more direct line to the car.  It was a great weather day to be out enjoying the woods.  I didn't see anybody all day, and I don't think I ever have when I've done a bushwhack hike.
A few extra pictures can be found on my Picasa web album.
Hike Stats:
Hike Distance:  8 miles
Hike Time:  5.5 hours, including stops
Total Vertical Gain:  ~ 2200'
Telemarkmike at 9:33 PM
Share