Since it is a holiday weekend, I chose today to do another bushwhack hike to avoid the crowded trailheads.  Back on May 5th, I had climbed Camel's Hump Mountain in the Dix Mountain Wilder ness Area, and I had noted several things on that trip.  There was a great looking waterfall across the Niagara Brook valley that came off of Macomb Mountain, and there was lots of open rock just below the SW shoulder of Macomb Mountain (just below the hill at 1066 meters).  I decided to go look at both those things today.

I parked at the West Mill Brook trailhead on Route 9 in North Hudson, NY.  Since I didn't have a 4 wheel drive vehicle, I chose to walk the first 1.1 miles to the gate.  From the gate, I followed the old West Mill Brook jeep road to the end, another 2.4 miles.  The first 3.5 miles had been easy walking and I was at the end of the old road in just over an hour.  From there, I crossed the brook and turned SE to follow the western side of West Mill Brook.  The walking was easy on the lower slopes just above the brook.
﻿


I soon passed a beaver dam on West Mill Brook.  I continued to follow the brook until I came to the drainage that would lead me to the waterfall.  ﻿ 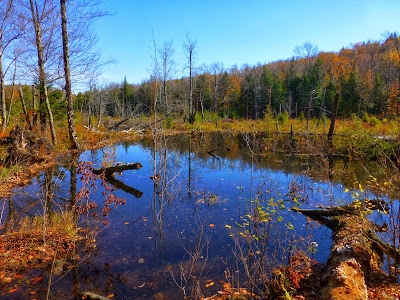 In looking at the topo map, the falls appeared to be about halfway up the slope to Hill 1066 (the SE shoulder of Macomb Mountain).  I climbed the left side of the drainage.  Soon a deep ravine developed in the drainage.  I stayed high on the left.  The bushwhacking became increasing difficult as I climbed.  There was a lot of blowdown as I climbed the left side.
When I decided I was in the vicinity of the falls, I cut across the slope in a northerly direction towards the drainage.  I was quite lucky, in that, despite the blowdown, I managed to reach the drainage right at the waterfall.  Perhaps the right side of the drainage is easier walking, but I chose the left after studying the contours on the map.
﻿
I was hoping that there was still water flowing over the falls.  Back in May when I observed the falls from Camel's Hump, there was quite a lot of water spilling over the rock.  I was hoping it wasn't dry.
I was in luck!  What a spectacular waterfall.  It is a two-tiered falls.  The upper falls is the larger falls.  It spills down onto a ledge where it flows a few feet north along the ledge and then spills over more rock, creating a second falls.  It had taken me 1.5 hours to reach the falls once I left the end of the West Mill Brook trail and began to bushwhack.  The falls is at about 2300'.
There was still quite a bit of water coming over the falls, but the ledge was dry enough that I could walk out on it for an up close look.  That may not be possible in the spring.  The ledge is probably very wet during the spring runoff season, or after heavy rain. 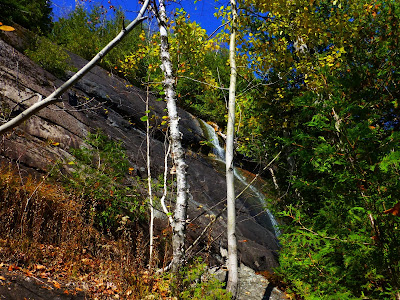 Rev and I actually sat on the ledge and had our lunch.  Afterwards, we went to the bottom of the 2nd falls to get a look at the lower falls.   ﻿ 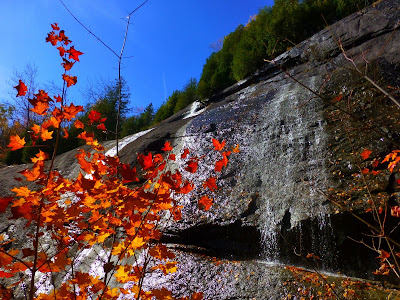 After I was done admiring the falls, I returned to the left side of the drainage and continued to climb the slope, heading for the Hill labeled as 1066 M (3550').  This is the SE shoulder of Macomb Mountain.  I got to walk on lots of open rock, like the picture below while climbing towards Hill 1066.

As I got to about 3100' the terrain switched to soft woods, and it got quite dense.  There was a little open rock at the top, but views were limited.   I reached the summit about 3.5 hours from when I left the car. 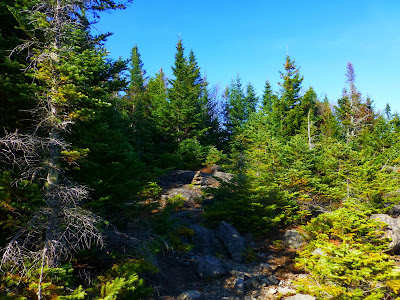 From Hill 1066, I headed south in search of the open rock ledge I had seen from Camel's Hump.  Again, I was quite thick until I got down to about 3100' where I stepped out onto open rock.  It reminded by of East Dix (Grace Peak), and the open ridge below me looked like the view from East Dix to Spotted Mountain.  It felt quite similar as I made my way down.   You can see from the pics below that it quite the same. ﻿ 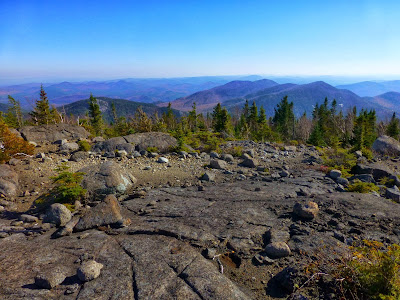 I made my way down rather quickly since I had started the hike at 11, and it was now 3 PM. 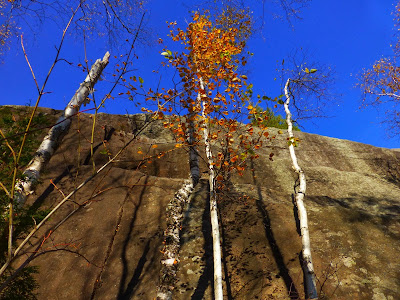 I angled down the slope heading NE as much as I could, working around some rock cliffs here and there.  Once I was back down by West Mill Brook, it was an easy walk on the west side of the brook until I got back to the West Mill Brook jeep trail.  Another hour and I was back to the car at 5:45 pm
It was great to see such a fine waterfall and lots of open rock in the same day.  I imagine very few people have seen this waterfall up close and it's worth the look.  Maybe there is an easier way to get there.
Hike Stats:
Hike Distance:  12.2 miles
Hike Time:  6.75 hours, including stops
Total Vertical Gain:   ~ 2600'
﻿ 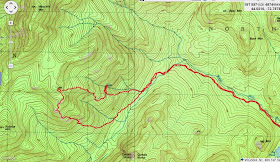