The Dial and Nippletop  Adirondack high peaks are generally reached from the Ausable Club.  People often make a loop by going over Bear Den Mountain then up the ridge over Dial to Nippletop, then down to Elk Pass and out via the Lake Road.  The loop can also be done counterclockwise, by going over Elk Pass first.
If your hiking partner is a dog, you are out of luck on the above loop hike.  The Ausable Club does not allow dogs anywhere on their property.  The most well known alternative, is to begin at the Round Pond trailhead and take the Dix trail as if you are climbing Dix, then bushwhack up Gravestone Brook to the Henry Goddard Leach trail.  This will put you on the trail near the Bear Den/Dial col, well off Ausable Club property.  You can then turn left and climb Dial and Nippletop.
This was my plan for the day, and I planned to return via the same route.  I started off from the trailhead at about 7:45 AM.  I was surprised to see someone had signed in the day before saying they were headed up Gravestone Brook.  At Round Pond I stopped to look at the 2 designated campsites near the pond.  Both were empty on this morning.  I thought both sites were average.  Both had decent spots to pitch a tent, and both had fire rings.
I continued on along the Dix trail.  After an hour, I passed the intersection with the Noonmark and Round Mountain trails.  The weather was pleasant and the bugs weren't bothering me.
﻿


After about 1.5 hours I reached a tributary that feeds into Gravestone Brook and a minute or two later I reached the brook itself.  If you cross Gravestone Brook, you will see nice stone steps on the far side and a trail arrow pointing left.  To the right, is a faint herd path heading up Gravestone Brook.
I wanted to hike to the Boquet lean-to before going up Gravestone Brook so I continued on the Dix trail another half mile to the lean-to.  It was there that I found the 2 guys who had signed the register indicating they were headed the same way I was.  They had arrived at the lean-to late the night before.  They slept late and were just having breakfast at about 9:30.  I told them I would probably see them later on the Dial/Nippletop ridge.
I returned to Gravestone Brook and began on the left side of the brook following a herd path.  It quickly faded away after about 2 minutes.  I starting rock hopping up the stream, but I was slipping on the wet rocks.  I found the right side of the stream to be easier walking than the left side.  At times there was a faint herd path, but certainly nothing that could be followed.  I just kept the brook on my left and worked my way up.  ﻿

High up the brook forks.  I stayed with the right fork to head for the col.  It took me about an hour to bushwhack up the brook to the Leach trail.  The last five minutes of the bushwhack was the hardest, but it still wasn't bad.  As I approached the trail, I saw a hiker headed for Dial.  He looked down at me like I was crazy.  Why was I coming out of the woods?  He didn't stop to ask.  He just kept going.
I stepped out of the woods and stopped to have a snack with my dog Rev.  We were at about 3300' and pretty much in the middle of the Bear Den/Dial col.
The trail up to Dial felt nice and easy compared to the woods.  Then I reached the summit, two young guys were resting on the summit rock talking to the lone hiker who saw me coming out of the woods.  I didn't stop to chat; I just continued on.   I was feeling good and enjoying a day with low humidity.
After about an hour I came to the junction with the Elk Pass trail.  I had come up that trail when I climbed Nippletop and Dial in the winter.  Today I wouldn't be descending that way.   Someone had dropped a pack at the junction so I knew I'd be seeing someone on the summit.  I went up and over the false summit before reaching to top.﻿

At the top there were two guys relaxing and enjoying the views.  It wasn't a bluebird day, but visibility was good and the entire Great Range was on full display.  On the other side, Dix and Hough provided great focal points.﻿

I didn't see any summit disc on Nippletop or Dial.  I don't believe I saw any in winter either.


The picture below, for contrast, is from my 2/5/12 winter ascent.
I talked with the guys on the summit for a little while.  They were planning to go to Elk Pass and camp.  As I headed back down, I was surprised to see 3 different groups with young children.  The first was a guy had a daughter who looked to be around 9.  Then I saw a guy with 2 boys who looked even younger.  Lastly I saw a dad with boys that looked like perhaps 12 and 14.    ﻿

I saw several lone hikers and several couples.  One guy was doing Dial and Nippletop for high peak numbers 43 and 44.  He planned to finish in August on Esther and Whiteface.
﻿
Once I got back to the Bear Den/Dial col, I bushwhacked down Gravestone Brook following the same approximate course I had taken on the way up.  I stopped near the bottom to play in a nice water hole with the dog. 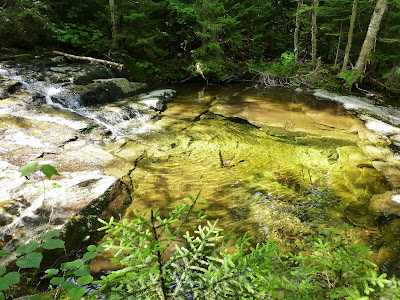 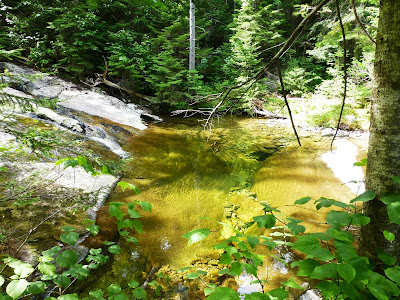 Once back on the Dix trail, it was an easy 1.5 hours back out.  As I got to the Noonmark trail junction I saw a large group of teenagers heading for Noonmark.  After that, all was quiet.  I got back to the car at 5 PM.
Gravestone Brook proved to be nice means of getting to Dial and Nippletop.  Route finding is necessary, but having the brook there makes it pretty easy.  It also provided good water for the dog (and me)!  A nice day with a combination of trail and bushwhack.
Hike Stats:
Hike Distance:  ~ 17 miles
Hike Time:  9 hrs, 20 minutes (including stops)
Total Vertical Gain:  ~ 4000'﻿
Telemarkmike at 8:03 PM
Share