Bennies Brook Slide on the northwest face of Lower Wolfjaw Mountain was choice for a hike on Monday.  The slide has been around for awhile, but it got enlarged and wiped clean by Hurricane Irene.  I'd heard great things about it, so it moved to the top of my list of places to go.
Leesa took part of the day off from work and we got a pretty early start from the Garden in Keene Valley.  We were on the trail by 6:30.  Knowing that it was going to be a really hot day, we wanted to get up the slide before the heat of the day.
We went in on the Phelps trail, past the second register near the ranger's cabin.  We didn't take the suspension bridge there.  I wanted to show Leesa the ADK leantos near Johns Brook Lodge.  We crossed the wooden bridge leading to Grace Camp and camp Peggy O'Brien and soon went by the leantos.  We may stay there at some point for a future trip.
We looped up to 5 corners, then headed north on the Southside trail.  The first slide on the right was Wolfjaw Brook.  We continued past that to the next brook, Bennies Brook, marked with a big 5' cairn.
﻿

We turned at the cairn to begin our way up Bennies Brook slide.  In all the pictures I've seen, the slide looks to be rather dry.  It really doesn't feel that way when you are climbing; escpecially down low.  There are lots of nice water shoots and water holes.  They are easy to step around, but they make the slide more interesting.
﻿

We made sure to day on the dry rock, although the wet rock still seemed to be grippy and not slippery in most spots.
﻿ 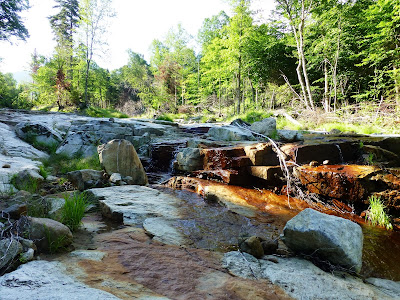 As we made our way up the slide, the sun came up over the Great Range.  The right hand side of the slide was in the sun, while the left hand side stayed in the shade.  We stayed on the left to be cooler.﻿

The landscape of the slide seemed to be ever changing.  That was one of the neat features of the slide.  Some portions were all smooth rock, some areas were rubble, other areas had carved rock.
﻿ 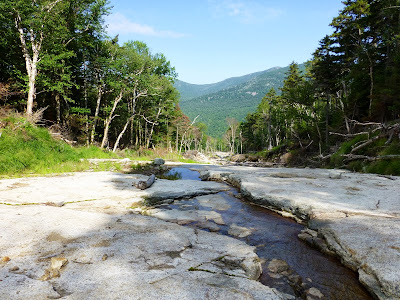 In the middle of the slide, it levels out a little before beginning the steeper portion on the upper half.  Leesa is not too keen on exposure.  This slide didn't bother her at all except one little spot near the top of the slide, just below the headwall.  I had no problem with the slide.  ﻿ 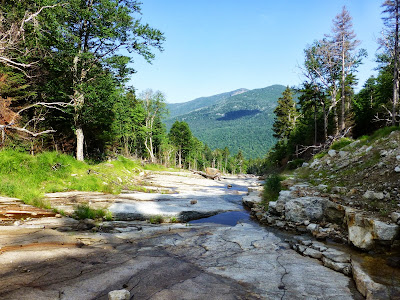 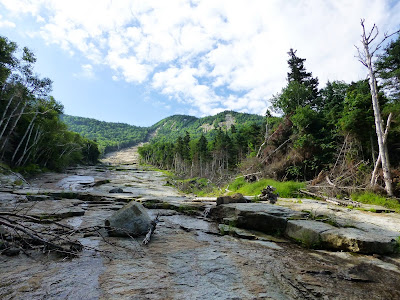 As we made our way up, the water began to wind down to a trickle.  Big Slide and Yard Mountains were visible behind us. 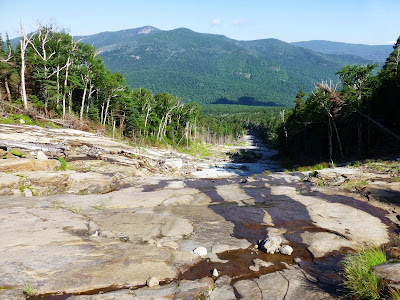 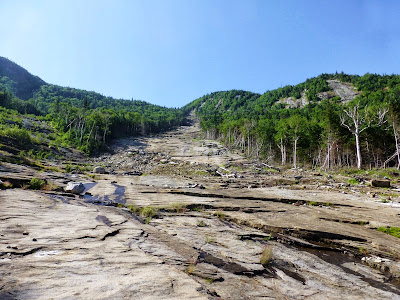 Once near the top portion of the slide, some rubble replaced much of the smooth slab of rock.  We chose to avoid the headwall at the top right of the slide.  We exited left near the top onto a newly forming head path. 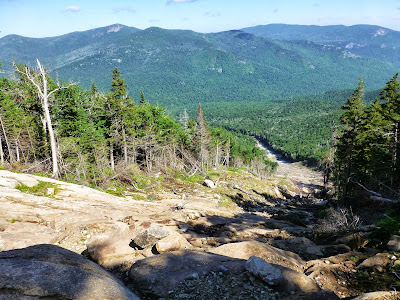 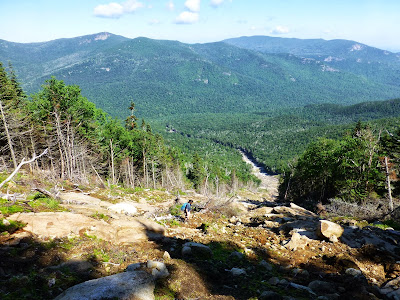 ﻿
﻿
The herd path was only a 2 minute walk before coming out on the Range Trail.  At the Range Trail we turned right and climbed the steep final stretch to the top.  Visibility was good.  We had some snacks before heading for the Wolfjaw col.  We took the Lower Wolfjaw Trail down to the Southside Trail. ﻿ 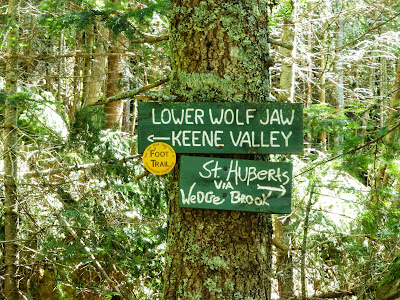 Once back to the Southside Trail, we followed it to where it got washed out by Hurricane Irene.  We crossed John's Brook near that point and bushwhacked the short distance back to the Phelps Trail; where we then had an easy 30 minute walk back to the car at the Garden.
I wished I hadn't put off this hike for so long.  Bennies Brook Slide is amazing.  Don't miss it.  You don't have to be a technical slide climber to enjoy it.  There are even nice level spots to sit and relax.  Kids would love it.  It's not a dangerous climb in my opinion.  I'm sure I'll be back again soon.
﻿