Monday night, June 3rd, I took the time to pay a return visit to Thomas Mountain, part the Cat & Thomas Mountain Preserve in Bolton, NY.  To reach the trailhead take I87 to exit 24, then travel east (up the steep hill) two miles to a right on Valley Woods Road.  Look for the parking area on the right.
This land was owned by the Lake George Land Conservancy until about six weeks ago when a Press Release came out on April 24th stating that the preserve had been purchased by the State.   The 1909 acre Cat and Thomas Mountain Preserve parcel will be combined with a 585 acre East River Road parcel to create an additional piece of forest preserve land.   Here is a map showing the location of the combined parcel.
The NYS Department of Environmental Conservation (DEC) will develop a proposed Unit Management Plan (UMP) for the area.  Through a stewardship agreement with the State, the LGLC will continue to maintain the trails they cut in the Preserve.  As far as the cabin on Thomas Mountain; the State will decide what to do with it.  The LGLC has proposed that it remain and be part of a mobility impaired trail system.
In the interim, while the UMP is being developed, several changes have already occurred.  Camping is now allowed, with the usual rules; campers must camp at least 150 feet from any water source or trail.  Fires are now allowed.  The cabin on Thomas Mountain is currently being treated the same as a lean-to.  It is available for day use and overnight use.  It may not be used exclusively by any one group, and is open to all.
I must say that I like the cabin and have stayed there overnight 3 or 4 times while it was under the care of the LGLC.  I hope that the State will find a use for it and will not remove it as a non-conforming structure.  I also hope that it remains in good repair and doesn’t become a party spot.
﻿

So with all these things in mind, I took off up the trail to look at the cabin and see how it is faring after six weeks in the state domain. The trail (actually a jeep road) goes about .6 miles to a split, where the trail continues straight to Cat Mountain, or turns right to go to Thomas Mountain. After the turn, the trail ascends 550 feet in the last .7 miles. Walking at a good clip it takes about 30 minutes to get to the cabin.

﻿
My dog Rev and I were the only ones on the trail this afternoon.It was quiet in the woods.When we arrived at the cabin, I was happy to see that all was in order. In fact, the cabin had a new front door with extra strong hinges.When I was last there, a new replacement door (board and batten style) had broken off the hinges in a strong wind.This new door may have been a repaired door with new hinges, but it looked new altogether.

From the front porch, or even from inside (looking through the picture window), there is a fine view of the lower portion of Lake George.The view is especially nice in the early morning or at sunset as fog rises or sinks from/to the lake.The cabin is a simple one room cabin with a rustic vertical ladder leading to a sleeping loft.Furniture consists of an old couch, 2 chairs and an end table.The roof is metal making the cabin a loud place to be during a rain storm.Been there, done that.Outside the cabin is a nice open sitting porch.

From the cabin, it is a nice walk on the blue trail to the true summit of Thomas Mountain.The terrain is rugged and beautiful.
﻿ 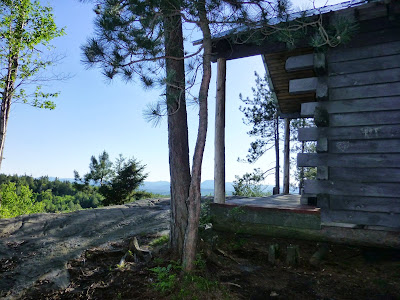 On this afternoon, the cabin was our turn around point.I just wanted to know that it was safe and sound and that all was well… and it was.
Hike Stats:
Hike Distance: 2.6 miles
Hike Time: 1 hour
Total Vertical Gain: ~ 740’
Telemarkmike at 5:17 PM
Share