Last year on Veteran's Day, I hiked the lower portion of the Tongue Mountain Range in Lake George, NY for the first time.  It was a strange weather day with hale and snow squalls followed by sun and then more snow squalls.

Today I did the same loop with Leesa, only we went clockwise this time instead of counter-clockwise as I did last year.  Three reasons for this:  1)  We'd catch more sun that way; 2) We would do the most rugged piece first, and 3) We'd be looking towards the view coming down the ridge.

The map below shows our route.  We started at the Clay Meadows parking lot on Route 9N, north of Bolton Landing.  The trail crosses the Northwest Bay inlet creek almost immediately before beginning the climb to the Tongue Range trail.  We hiked quickly, and reached the intersection with the ridge trail in 55 minutes.  I noticed that there are new signs and trail marker discs on the trail.  Last year, I remember there were long stretches with no markers.  Good to see the new ones.


At an hour and 15 minutes we were at the leanto on Fifth Peak.  As far as I can recall, no leanto in the Adirondacks offers a better view than this one.  If someone else can think of one, let me know!

From the leanto, it is a downhill roller coaster hike to Montcalm Point at the tip of tongue.  We followed the trail south to French Point Mountain (FPM), which offers an even better view than Fifth Peak.  From FRM, you can see the Mother Bunch Islands to the North, and the Narrows Islands to the south.  Black Mountain is across the lake on the east side.  Leesa was thoroughly impressed with the view.

We paused for a while on FPM.  It was warming up quickly from our 27 degree start.  It must have been at least 40 degrees already by 10 AM.

As we made our way further down towards First Peak, we had views most of the time since the leaves are off the trees.  At First Peak, we enjoyed another fantastic spot.  It is hard to pick a favorite between FPM and First Peak; both are awesome. 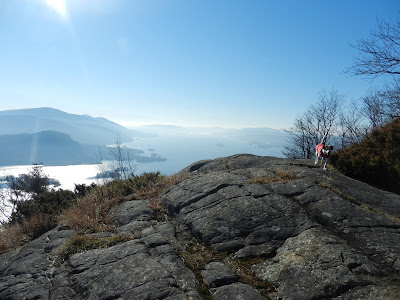 We ate our lunch at First Peak.  We only saw one boat out on the lake.  All was quiet, except Rev whining for more food.


Surprisingly, the steepest part of the ridge is probably the last rock outcrop heading south before you get to the point of tongue.

At Montcalm Point, the sun was strong and the waves were lapping the shore.  It was almost like summer. 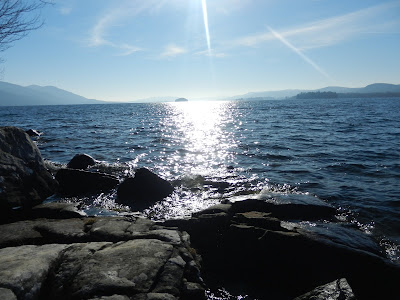 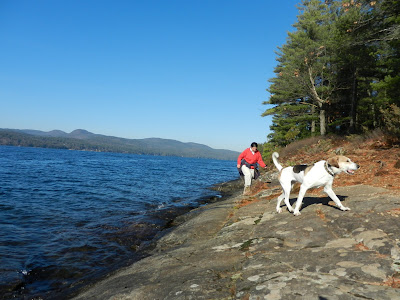 From Montcalm Point, we followed the shoreline route back to the car.  Don't be fooled that the shoreline route is an easy walk along the water's edge.  There are quite a few ups and downs and some parts have a lot of rock in the trail.  Not difficult, but not a stroll either.

Allow a full day for this hike and enjoy all the ridgeline views.