Buck Mountain and Bear Mountain are a pair easy to reach summits in the Dix Mountain Wilderness Area that have open rock summits with great views.  In previous bushwhack hikes in the area, I could tell that this pair of mountains would be well a visit.  The open rock is easily visible from other nearby peaks.

To access these mountains, I chose the West Mill Brook trailhead, although I could have also entered from the Shingletree Pond trail.  Both trailheads are on Route 9, about 4-5 miles north of the Blue Ridge Road in North Hudson.

On this day, I was on the trail at about 8:45.   No hurry, since I figured this pair would be a half day hike.   A snow squall had just passed through, leaving a half inch of light snow on the ground.  I followed the West Mill Brook trail for 1.4 miles from Route 9 before turning North to cross the brook and begin my bushwhack.  Only one hunter's truck was parked at the end of the jeep access road.  Two persons from the truck had walked in the the West Mill Brook Trail, but I never did see them.

I entered the draw to the east of the steep false summit.  After skirting around the early ledges through some open hardwoods I followed a straight course at 315 degrees to the summit of Buck Mountain.


It was an easy approach.  The hardwoods were light and were dotted with a few spruce and pine.  About 400 feet from the summit I reached some gently sloping rock slabs that were partially covered with moss and were easy to climb.  I reached the summit at 10 AM.

From the summit there are sweeping views of the Dix range, Giant & Rocky Peak Ridge, Camel's Hump, Camel Mountain and Niagara Mountain as well as lesser peaks.

From Buck, I turned a little more westerly, to a course of 290 degrees to get to the south face of Bear Mountain.  The south face of Bear looked to be an easier approach than the east face.  It turns out I  didn't go quite far enough along the southern face.  At the point I chose to ascend, I ran into a steep slab and had to pick my way around to a seam where I could get a hand hold.  Somehow my dog Rev wasn't bothered by the steep slab.  I couldn't watch her. 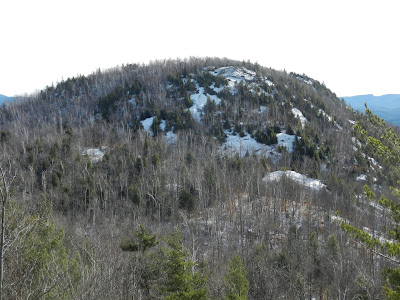 Looking back at Buck Mountain from the shoulder of Bear Mountain


At 11 AM I was on Bear.  Bear is a little larger than Buck and has some open rock interspersed with small clumps of pines.  All the summits that I've been to in this area have been quite nice.  The temperature was still down in the high 20's but the winds (which were predicted to be 10-20 mph) weren't bad, and the sun was out.  Rev and I had an early lunch on the summit.

We stayed until I started to get a little chilled and then it was time to go down.  This time I took a route a little further to the west to find an easier descent.  Once off the summit cone, I followed a compass reading of 160 degrees until I was back a the West Mill Brook.  From there, we found spot with a log across the brook and made our ways across and back to the jeep road.  20 minutes later we were back at the car.  It was only 1 PM, but I had things to do at home, so this half day hike was perfect. 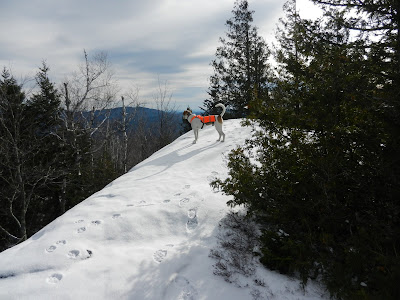