The Hoffman Notch Wilderness in the Towns of Schroon, Minerva and North Hudson NY doesn't offer a lot of marked hiking trails, but the trail from Blue Ridge Road in North Hudson to Hoffman Notch is spectacular.  We took the afternoon to follow the trail south along Hoffman Notch Brook (which flows northward) until the brook veered away from the trail towards a couple un-named ponds south of Hornet Cobbles.  At that point, our goal was to bushwhack to the pond shown on the map in Hornet Notch (see map below).

If we had stayed on the Hoffman Notch trail, it extends 7.4 miles to Loch Muller. Approximately halfway through its' 7.4 mile journey to Loch Muller is a pond known as Big Marsh. South of Big Marsh, the trail follows the north branch of Trout Brook. In any case, our destination was the unknown pond. 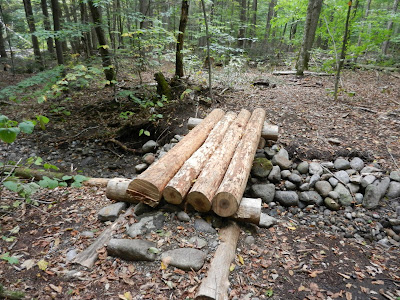 Just before Hoffman Notch Brook reaches Blue Ridge Road it intersects with Sand Pond Brook. Beavers have flooded out the area thereby placing a small section of the trail under water. Fortunately trail crews have begun working on this trail in recent months and have put in at least 6 new foot bridges over the Hoffman Notch Brook between Big Marsh and Blue Ridge Road. 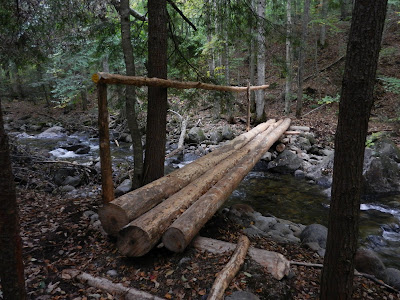 Hopefully they will address the flooded beaver area soon, but it's nice to see the progress. The crew has also done some work on the trail itself in addition to the brook crossings.
﻿

We made our way across the flooded beaver areas and then enjoyed the trail along the brook until it came time for our bushwhack.  It took us about an hour to reach the location where we turned off the trail.  The forest was a mix of hardwoods and pines at that location and not too difficult to navigate.  Unfortunately, Leesa stepped on a hornets nest in the ground shortly after our bushwhack began and she was rewarded with 5 bee stings.﻿

After 20-30 minutes we reached our destination just as a light rain was beginning to fall.  It was nice to see a pond that very few people trek in to see.   I'm guessing that probably less than 25-50 people see this pond in any given year.
﻿

We didn't linger, as the weather was going downhill.  We also didn't know how much the bee stings were going to bother Leesa.  She claims she doesn't ever remember being stung by a bee as an adult.  I can't imagine that.  I get stung every year.﻿ 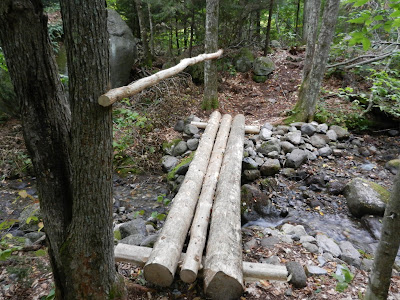 We retraced our route back out and just before we reached the flooded area again we saw a group of three people on there way in to do some rock climbing.   I was kind of surprised by that since it was already 4 PM.  They weren't carrying any gear to stay overnight.
﻿


I'll be returning to this are to check on the progress of the trail crew in making a crossing over the beaver flood zone.  Once that area is easily crossed, it will be an enjoyable trip for anyone to hike south into the notch.
﻿ 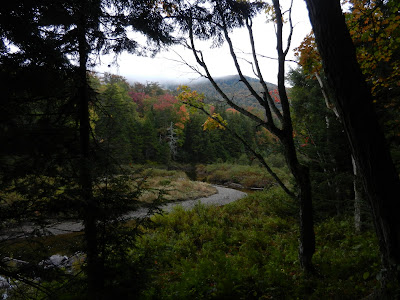