Tonight we took the kayaks out for a 2 hour paddle on Lake George in the Adirondacks of New York.  We launched from Route 9L at Warner Bay where there is a gravel pull-off from the road and a small strip of state land where you can launch.

Our itinerary just to paddle up the eastern shore of the lake until we had to turn around towards sunset.  We launched about 5:45 PM and made our way northward.   After an hour, we passed Elizabeth Island, a privately owned island that has some houses on it.

After the swim it was time to make a beeline back to the car.  The night had become a little overcast, so there was no dramatic sunset.  Still it was a great night to be in the boats.


We got back to the car around 8 PM after a nice paddle.  As we were paddling back, it seems everybody was grilling at their waterfront homes and the smells were fantastic.  We had eaten before we started out, but we were hungry again.  I was ready to pull up to the boat slip with the best smelling food.

You can see the route here on Wikiloc or below on EveryTrail. 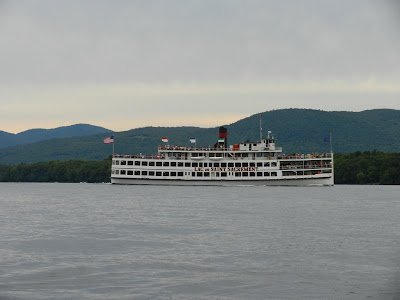