Some of the most most accessible alpine terrain in New York lies in the Macintyre Range (Wright, Algonquin, Iroquois) of the High Peaks Wilderness.   Mount Marshall is also part of the Macintyre Range, but its' summit is below treeline.  Leesa and I had been on Algonquin and Wright previously, but had never continued on to Iroquois, so today was the day we decided to do that.


The weather forecast was good for the morning, but questionable for the later part of the afternoon, so we got on the trail about 7:15 AM.  The climb to Algonquin is short and steep with a vertical gain of about 3000 feet in 3.8 miles or so.  The trail becomes quite rocky and has one steep long rock slab that is also sometimes wet.  Wear some sturdy footwear with good traction.

We climbed pretty quickly, and we enjoyed the fact that we were somehow mostly devoid of bugs for the majority of the day (very un-Adirondack like, especially for June).  We reached the summit of Algonquin at 9:45.  The only person on the summit was an ADK summit steward.  He told us he had arrived at the summit  around 9 and that he had only seen one person before us at the top.

We continued on and soon left the marked trail for the Iroquois herd path.  At the beginning of the herd path, there is a trail sign pointing to the left, and on it is written Iroquois with a right arrow (see picture below).  The herd path was easy to follow.  There was one muddy quagmire shortly after the start, but not too muddy after that.

We reached the summit of Iroquois at 10:45; an hour after leaving Algonquin.  What a great summit, and we had it all to ourselves.  We sat down to eat part of our lunch.  The weather was fantastic.  After owning the summit for awhile, we returned to Algonquin at exactly noon.

On the way back, I decided to climb Wright (so Rev could claim it!).  Leesa decided that she would slowly continue her descent, knowing that Rev and I would catch back up to her.  When Rev and I reached the summit, we talked with another summit steward.  There were about a dozen people on top of Wright when we got there.  We stayed for about 5 minutes and then dropped back down to catch up to Leesa.

We found her about halfway back to Adirondack Loj.  Once rejoined, we all made our way back to the car.  We had our boots off by 3:15 PM.  Still nice weather.   We didn't see any rain until 6 PM while driving home. 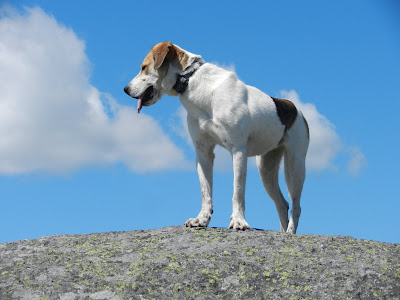