Whiteface and Esther Mountains in Wilmington, NY are both on the Adirondack High Peaks list, and are both often hiked together since close together.  There are several trail options to choose from.  On Saturday, Leesa and I chose to start at the Atmospheric Sciences Research Center and hike up Marble Mountain to Whiteface Mountain and then on the way back, take the herd path to Esther Mountain.

Whiteface Mountain is the home of Whiteface Ski Area (Largest Vertical Drop East of the Rockies).  It also has an auto road which goes to within about 250 feet of the summit.  The actual summit has several buildings on it.  Since the summit is an open rock summit, there are fantastic views in all directions, provided the weather is good.

Esther's summit is pretty much in the trees.  There is a small opening looking back to Whiteface, otherwise the summit views are quite limited.

We started from the parking area at 10:15 AM.  There are no trail signs at this trailhead, but from the designated parking area, the trail isn't too hard to find.   It appears that perhaps there was once an incline railway going up to the summit of Marble Mountain.  Several old concrete piers remain and the trail is totally straight up a rocky path.  The summit of Marble Mountain is just a short .9 miles from the trailhead and we reached it in about 35 minutes.  There are some views at that location.

From Marble, the path was no longer a straight rocky incline trail, but a normal trail winding its' way upward.
After 2.25 miles, we reached the junction with the Esther herd path, but we continued towards Whiteface.  Esther was our 2nd priority.  After another mile, the trail reached the auto road at about 4350'.  We chose to walk the auto road the remaining short distance to the summit.  The last little section of the trail was steep and somewhat icy and snowy.  The dog might have objected.  It was also starting to rain a little bit, but fortunately, that only lasted about 5 minutes. 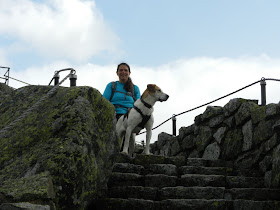 When we got to the summit, we had it all to ourselves.  There were no other hikers and the auto road doesn't open up until close to Memorial Day.  Nice to have a commercialized summit to ourselves.

We stayed on the summit for a half an hour and had some lunch and enjoyed the views. 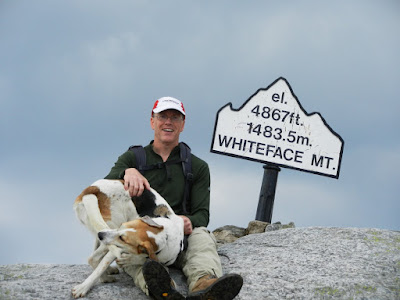 Mike - obviously not getting Rev to sit still 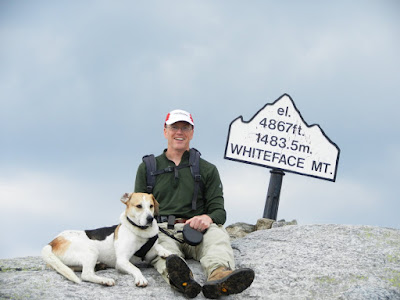 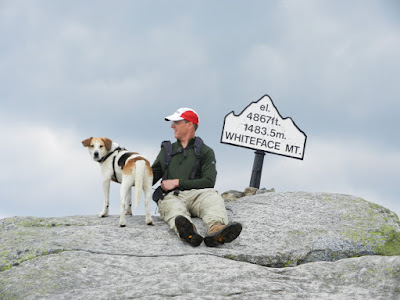 But not for long 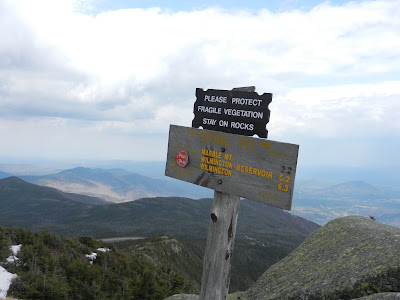 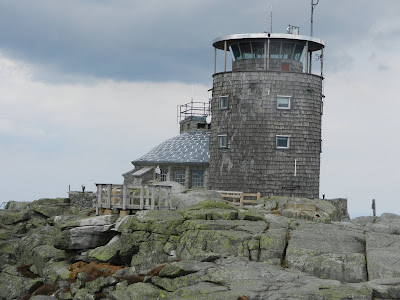 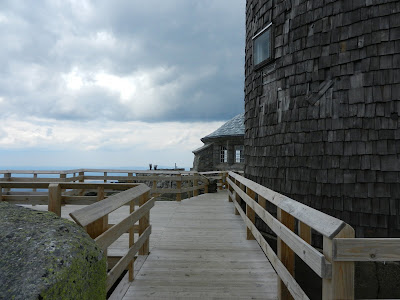 After enjoying our time on Whiteface we walked the mile back to the Esther Mountain herd path and followed that to the summit of Esther.  Even though the path is supposedly not maintained, there was a nice foot bridge at one point over a swampy area.  There were no trail markers, but the path was easy to follow.

We enjoyed the day.  The ice line was at about 3500'.  At that point, put on our micro spikes until we got to the auto road.  There was a little snow left in the shaded areas up high.  There were still no bugs on the trail, so that was great.  We are starting to see the black flies in some areas down low.  A sucessful day and trip!

My Whiteface and Esther Mountain map at EveryTrail