Yesterday  (Friday), I worked all day in the rain at Gore Mountain Ski Area.  The ski conditions actually became pretty good as the snow softened up.  I'll be there again tomorrow, so today was a hiking day.   Leesa and I didn't want to drive far so I suggested another mountain ridge north of Brant Lake that I hadn't hiked before.

This ridge consists of Number Eight Mountain, Little Stevens Mountain and Stevens Mountain.  The ridge runs east-west just north of First, Second and Third Brothers.  I knew that there were some open ridge views.

Today's weather was mid 30's with a mix of sun and clouds.  We parked on Pharaoh Lake Road and hiked north towards Pharaoh Lake about a half a mile before turning right (east) to bushwhack up Number Eight Mountain.  There is an open ridge just before reaching the summit where you get great views of Brant Lake to the south.  The summit is treed.  We continued on with a steep descent in hardwoods approximately 700 feet before climbing 500 feet to the top of Little Stevens.

The summit of Little Stevens also has a great view to the south.  We continued eastward toward Stevens Mountain.  The ridge between Little Stevens and Stevens only drops a hundred feet or so before climbing Stevens.

The summit of Stevens Mountain has a great open rock summit.  Great views every direction except north.  On the summit of Stevens we met my friend Dave who had arranged a 12 o'clock hookup with us on the summit.  After enjoying the summit for a bit, the 3 of us descended the steep southern face following a blue blaze trail marked by the boy scouts.  This trail leads to Scout property on Curtis Reed Road.   Dave had permission to park and hike from their property, so we returned via the blue blaze trail to his car.  He then brought us back to our car. 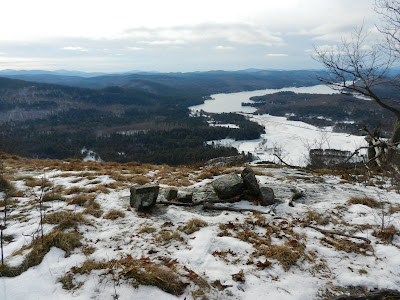 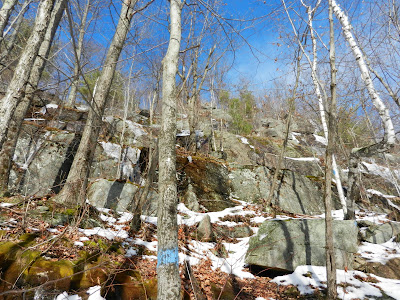 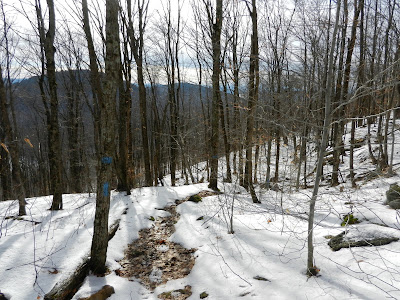 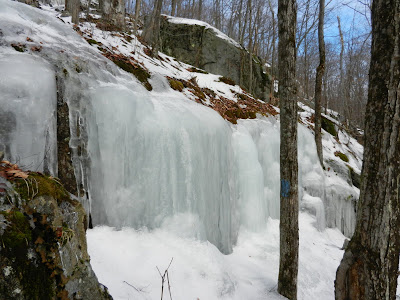 The bushwhack on this trip was relatively easy.  We managed to avoid blowdown and thick pine forest.  The hike was quite similar to First, Second and Third Brother except that Stevens Mountain has quite a spectacular open summit compared to the others.

We enjoyed the day.  We wore MICROspikes the entire hike.  The southern exposed ridge faces have very little snow,  only ice.  Even the shaded areas on the north side only had 4-5 inches of snow.