Saturday proved to be a great day to climb a couple more high peaks, Upper and Lower Wolfjaw.  I had climbed them many years ago with my dad, but Leesa had never climbed them.  As far as Adirondack High Peaks go, they rank numbers 29 and 30 respectively at 4185' and 4175'.

We parked at the designated parking area near the Ausable Club in Saint Huberts.  We left the trailhead at 7:45 AM.  There were already about 8 cars in the parking lot, but nobody was on the trails we took.  We broke trail all day long.  There was a fresh 1/2 inch of snow at the trailhead, and about 6 inches of snow at the summits.

The route we took was the Ausable Club Road to the West River Trail to the Wedge Brook Trail.  That brought us to the col between Upper & Lower Wolfjaw.  From there we ascended Lower Wolfjaw and returned to the col by 11:45.  We hadn't planned on ascending Upper Wolfjaw, but it was early enough, and we were still feeling good, so we ascended Upper Wolfjaw and returned to the col at 1:30.   We descended the same way we went up and were back at the car at 3:45.  At about 2:30 we saw 4 younger guys heading up.  They were going to set up camp at a designated camp site, located at about 2700' in the bowl just before the climb to the col.  The were going the spend the night, then head for Gothics the next day.  We hope they were warm enough, since it got to about zero degrees Saturday night. 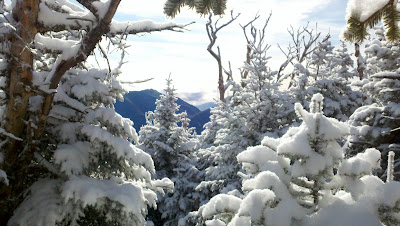 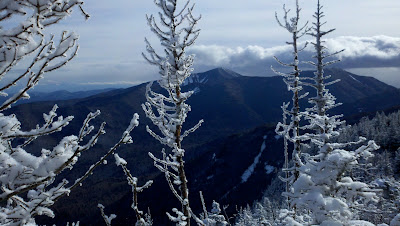 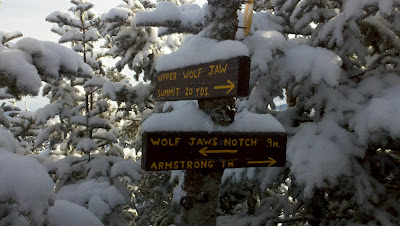 This hike really felt great.  It was 15-20 degrees all day, but there was no wind, even at the summits!  The sun was out all day and visibility was great.  You can see more pictures from this trip on my Picasa Web Album.﻿
Telemarkmike at 6:32 PM
Share