UPDATE - Tuesday, August 30th:
I just learned that the bridge over Marcy Dam got washed out by Hurricane Irene and the High-Water bridge over Phelps Creek had substantial damage.  Also - the bridge on Adirondack Loj Road (closest to the lodge) suffered severe damage.  We were just at all those places the day before.  Below are pictures of Marcy Dam Bridge and Phelps Creek High-Water bridge the day before Hurricane Irene destroyed them.

Saturday August 25th was the day before hurricane Irene hit the northeast, but it was a nice day for hiking.  Leesa and I wanted to climb another of the Adirondack high peaks.  Phelps was the choice for the day.  The mountain is named after Orson Schofield "Old Mountain" Phelps (1817–1905), who cut the first trail up Mount Marcy and named several of the Adirondack peaks.
We drove towards Lake Placid and the Adirondack Lodge, then turned left onto South Meadows Road and parked beside the trailhead. 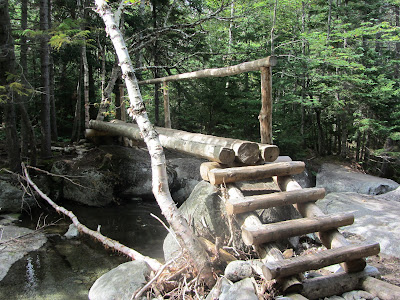 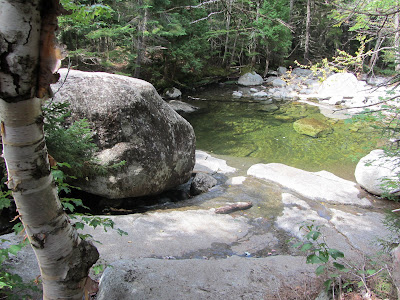 We both swam in the pool of water at High Water Bridge on the way down.  It was cold, but quite refreshing and shoulder deep!  There are also designated campsites near this bridge as well as near Marcy Dam.

The beginning portion of the hike along the South Meadow truck trail is as easy as walking on the road.  This trail goes approximately 2.6 miles until you reach Marcy Dam.  From Marcy Dam, the Van Hoevenberg trail climbs slowly and steadily towards Mount Marcy.  The Phelps trail branches left off Van Hoevenberg and rises about 1300' in the one mile to the summit.

The views of Mounts Colden, Algonquin and Wright Peak are excellent.  You also have a good view of Marcy, Tabletop, Giant and Big Slide.
Telemarkmike at 2:40 PM
Share