This post is a little late for a conditions trip report, but I decided to document the trip anyways.  After the dumping of snow on 3/13 from Blizzard Stella, we were anxious to climb a high peak and see what goodness we could find.  The problem was that with 3 feet of new snow on the ground, most trails were not broken out yet.

We settled on Giant Mountain since it was the closest to us and also likely to have already have some foot traffic.  We didn't arrive at the trailhead until noon, but that gave others more time to break trail ahead of us and we knew the hike was only 3 miles each way.

We passed a family near the start and it looked like they were not intending to go all the way to the summit.  The trail was indeed broken out, and most folks had worn snowshoes, so the trail was smoothly packed.

While the forecast predicted cloudy skies, we were blessed with blue skies all day.  If was warming up to around 40 degrees, so all the better.  I had my sunglasses on all afternoon.

When we reached the Giant Washbowl, I was a little disappointed to see that someone had built a makeshift shelter a mere few feet from the trail.


As we reached the split in the trail at the bump, we ran into some familiar hiking faces.  We chatted for a minute and Rev slid down a rock face at the upper end of the bump and we continued on.

Just above the Roaring Brook Trail Junction, we ran into 8 hikers coming down barebooting with no snowshoes.  They chewed up the trail quite a bit.  We had to watch our step until we got near treeline. 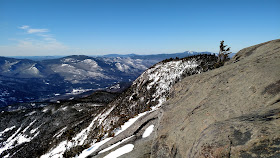 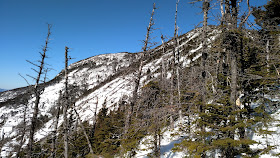 At the top, I went down into the little sheltered space below the summit and Rev jumped down to join me and landed in a big snow drift.  She wiggled her was out and joined me for a snack.

We chose not to swing over to Rocky Peak Ridge.  It was mid afternoon and that trail was only slightly broken out.  On our way down, Leesa took full advantage of some butt sliding opportunities, while I chose to do some snowshoe surfing.

After our hike, we went to the annual ADK High Peaks Forum Gathering in Upper Jay for a great evening of comaraderie and food! 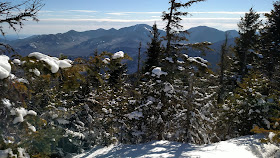 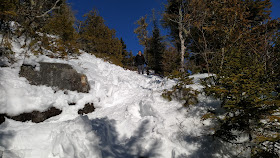 Leesa chose our hike for today.  She was interested in climbing McKenzie Mountain in Lake Placid, NY.  Last weekend we had climbed neighboring Haystack Mountain and by climbing McKenzie, she would finish her Saranac 6er peaks.  I've been on McKenzie 3 times previously, including 2 times in winter, but another trip up was fine with me.

We chose to start at Whiteface Inn Road and take the Jackrabbit trail past the Placid lean-to to the McKenzie Mountain Trail.  We started at exactly 12 noon.  The Jackrabbit was an easy 1.9 miles to the junction.  We bare booted on the hard surface that had a dusting of snow on top.

At the McKenzie Mountain trail, we put on our microspikes.  I was hoping they would be sufficient.  I knew that the climb up the steep south facing slope was likely to be icy.  We had our dog Rev with us as well.

After a quarter mile, we hit the steep section and began to climb.  The top half of the steep was quite treacherous.  We had to leave the trail for most of this section (so Leesa and Rev wouldn't slip and lose their footing on the ice).  It was a slow climb on this section.  We saw 4 groups coming down. One group had turned around (they didn't have traction devices).  Their tubular snowshoes weren't sufficient.  Another group turned around at the last false summit because they had reached their agreed upon 2 PM turn around time.  Another man had summited and was on his way down.  The last couple we ran into just prior to the true summit.  They had crampons so they were fine.

It was 2 PM when we got to the top of the steep section.  I was a little concerned about the time, but on the last stretch Leesa was able to move more quickly.  It was a beautiful blue sky day and the base temperature was 15 degrees at the start.  There was a thermometer on the summit below the summit sign.  It read -10 degrees, but we both agreed that it didn't feel that cold out. 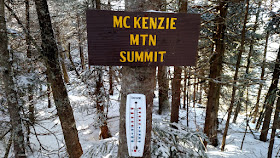 Leesa asked about the possibility of going down the Shore Owners Association (SOA) trail to complete a loop instead of going back the way we came.  She was worried about descending the steep icy section and a loop hike is always more interesting.  I had done the SOA trail before and I suspected it would not have any ice.  Any only concern was whether we would break through the crust.  I didn't know if anyone had been on the trail recently.  We had packed our snowshoes with us, so I decided we would give it a try.  It was now 3 PM.

This turned out to be the right decision.  No one had been on the trail, but the crust was supportive and there was a little powder as well.  The ridge north of McKenzie was a little had to follow the trail, but as soon as the trail started down the ridge towards Bartlett Pond, it was easy to follow.  It was an absolute delight compared to the icy McKenzie Mountain trail!  It was actually a slightly shorter route as well.  It had taken 3 hours on the ascent, but the descent was accomplished in 2 hours.


Bartlett Pond was basking in sunshine and we stopped a minute there on the way down.  Below Bartlett Pond a little ways, the trail comes to Two Brook and follows it down to the Lake Trail.


The SOA trails also have some nice signs along the way. 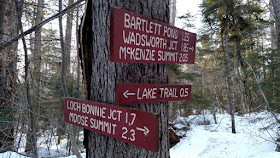 Near the bottom of the Two Brook Trail is the remains of what was once an impressive stone foundation.  Perhaps old mill remains?

We will be back to this area.  We want to finish the SOA trail to Whiteface Landing (including a visit to Eagle Eyrie).  I also want to take Leesa up Moose Mountain.


When we signed out, we saw that not everyone we saw on the McKenzie Mountain trail had signed out yet at the register.  We were glad we didn't have to negotiate the ice on the way down and we hope everyone that returned that way got down safely.