The Siamese Ponds Wilderness is quiet in terms of visitor traffic and that is a nice feature.  It also offers many hidden gems which help to double the fun.  Leesa and I visited a few gems today.  Our first stop was the Shanty Brook Trail.  This is a herd path that goes to Mud Ponds, but that wasn't our goal.  We wanted to climb an un-named open rock hill that lies just west of the beginning of the trail.

There is a parking lot on the east side of Route 8, but there is also enough room to park on the west side, which is what we did. You can also drive in the jeep road a couple hundred yards to an attractive campsite near the water.  The jeep road ends just after the campsite.

There used to be a cableway to use to cross the Sacandaga River for the Shanty Brook Trail, but it is no longer there.  Water levels were low so we simply waded across the ankle deep river using our water shoes.

Once across, we followed the Shanty Brook Trail until it turned northward.  This was our jumping off point to begin our short bushwhack.  Google Earth showed a horseshoe shaped summit of open rock. Our climb of the eastern slope was steep, but open and short.  We climbed about 600 feet in 0.4 miles through mostly beech trees.

The summit did not disappoint.  We explored the eastern half of the horseshoe first, followed by the west side.  It became obvious to us that this is a rock climber's location.  There were various foot paths in the area and we saw some rock hardware attached to some of the vertical surfaces.  We also could hear some voices down below but we never did see anyone. 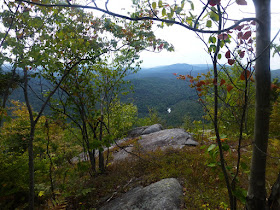 It was fun to explore all the nooks and crannies of the different rock faces. 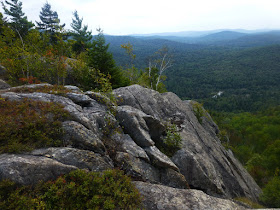 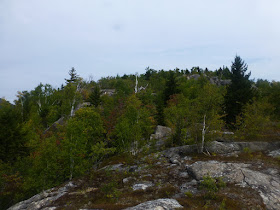 When we were done, we returned to the Shanty Brook Trail (unmarked herd path), and followed it for about a half mile to see what it looked like.  We came to a for side path on the right which led to the waterfall below.  This was only about 3/4 mile from the road.  It had quited a bit of water flowing over it considering the lack of rain recently. 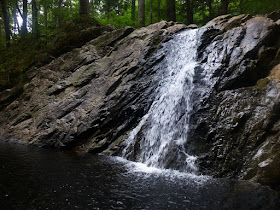 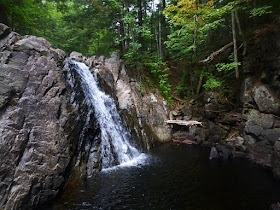 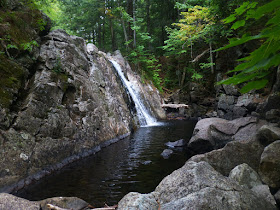 We spent some time here and went for a swim.  It would be interesting to see what this looks like in the spring, or after a period of heavy rain. 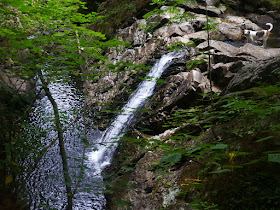 Next we went back to Route 8,crossed over to the east side of the highway and took the trail to Kibby Pond.  The trail only had two trail markers on it that I saw, but it was flagged with orange ribbon (which was needed in spots since the trail was quite overgrown in spots).

This trail didn't do anything to impress us.  It ended at an illegal campsite at the water's edge, complete with a smashed up rowboat.  The pond itself was good size and might have been nice for a paddle, but we didn't go out on the water. 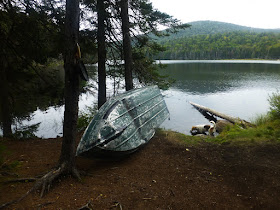 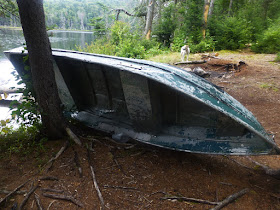 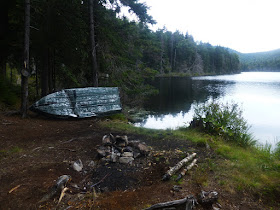 Our last adventure for the day was a short walk on the East Branch Gorge Trail in the same vicinity. We had been here before and remembered the great watering holes.  We chose the one at the cableway about a half mile in from Route 8.  The water was actually not cold but comfortable for swimming.  We took adavantage and went for a swim.  A good way to end the day. 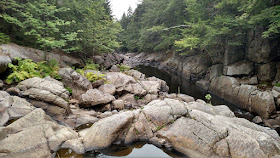