Last winter I was working at Gore Mountain one day and I ran into former DEC forest ranger Steve Ovitt.  We got to talking, and he told me about some of the fine xc ski trails in the Siamese Ponds Wilderness Area of the Adirondack Park.  In particular, he described the new (2010) ski trail called the Botheration Pond ski trail loop.  An ~ 8 mile loop trail beginning and ending at the Old Farm Road trailhead, near Thirteenth Lake.  I stored that information away for future reference.  Of course last winter we didn't have favorable xc ski conditions, so I never made it out there.

During the summer I read a blog post by Harvey Road - The New York State Ski Blog about The Botheration Pond Trail.  Thanks Harvey!  Included in his fine writeup was a link to a nice map showing the trail system.

Today, one day after getting a foot of snow, Leesa and I headed for the Old Farm Road trailhead.  We were the 1st ones there at 8:30 AM.  The road had been plowed, and was easily driveable.  As we got ready to start, we were happy to see someone had broken trail late yesterday.  That would aid our progress today.

We followed the tracks south, past the kiosk where the Botheration Loop starts and finishes.  Since the northern part of the loop hadn't been broken out, we continued south and followed the tracks, which turned to take the southern part of the botheration loop.  The tracks stopped just shy of the first bridge over the east branch of the Sacandaga. ﻿
﻿ 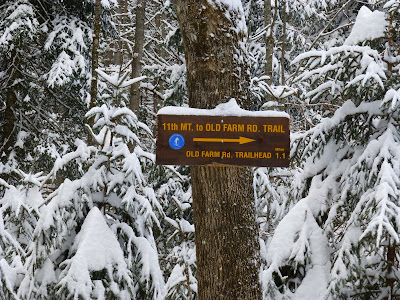 We continued on, breaking trail.  We soon reached the new (2009) 55' bridge over the east branch Sacandaga River.  Quite nice and impressive!  There is also a designated campsite on the western side of the river, just prior to the bridge.
﻿ 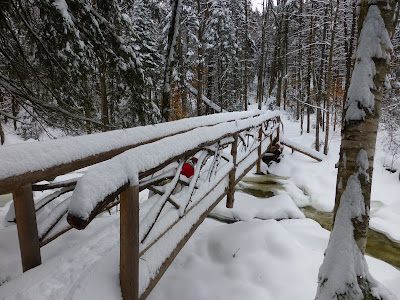 It was a little slow going breaking trail.  Rev was out front and tried to do it for us, but she didn't quite pack it down nice.  We continued on until we reach the western side of Botheration Pond.
﻿

The pond is about the halfway point in the loop.  We turned around at point, since we didn't think the rest of the trail had been broken out, and we wanted to enjoy the fruits of some of our trail breaking.  It turns out that when we got back to the kiosk, someone else had started the loop in the clockwise direction.  Maybe we wouldn't have had to break much more trail if we had continued.
﻿
In any case, we had fun backtracking in our tracks.  At the kiosk, we did follow the trail in .8 miles to the trailhead for the Balm of Gilead Mountain trail.  At that point, it was time to head back and call it a day.﻿

Great to finally have a good fresh dumping of snow on the ground.  It's been a long time.  We both enjoyed this area immensely, and we'll be back to ski here again.
﻿
When we got back to the car, 5 other cars were parked at the trailhead.  Perhaps more trails will be broken out soon.  I suspect so.  I know tomorrow I'll be back to ski from the Old Farm Road trailhead south along the east branch Sacandaga River to Eleventh Mountain on Route 8.  This will be another new adventure.
Here is more information on the Botheration Loop from the Adirondack Almanac. ﻿