What a stretch of nice weather in the Northeastern US.  It was a perfect opportunity to do a long hike.  Last weekend was Dix Mountain, this Saturday was the lower Dix range, including 4 peaks:  Macomb, South Dix, East Dix and Hough mountains.  All 4 are Adirondack High Peaks and they could be done in a 12.5 mile trek which is what we chose to do.

We started at the Elk Lake trailhead, same as last weekend. I knew we would have to be early to get a parking spot, due to the Victoria Day holiday weekend in Canada, and I was right. We arrived at the trailhead at about 7:15 AM and we grabbed the next to last parking spot. Hikers arriving later had to park 2 miles to the South at Clear Pond and walk the road (or catch a ride) to the trailhead. The car next to us had a nice NY license plate "50 PEAKS". I did see a lot of car with Canadian plates.

We followed the Dix path for an hour until just before the Slide Brook Leanto where there is a foot bridge with a handrail. Just after crossing that footbridge, there is a rock cairn ahead denoting where the Slide Brook herd path branches off to the right. We took that herd path which follows Slide Brook up to the Macomb Slide. We then climbed the slide which brought us up to 4000' and just 400 feet shy of the summit. At the top of the slide, the herd path resumed and we followed it to the top of Macomb Mountain. It took us about 2.5 hours to get to the top of Macomb from the car.

We left Macomb, following the herd path to South Dix.  In the col between Macomb and South Dix there is a fork with a rock cairn.  The left branches to the Lillian Brook Herd Path, the right branches to South Dix.  We turned right here and began the rocky ascent up South Dix, which I thought was the best part of the hike (along with Macomb Slide). 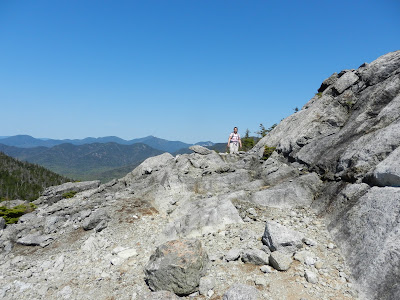 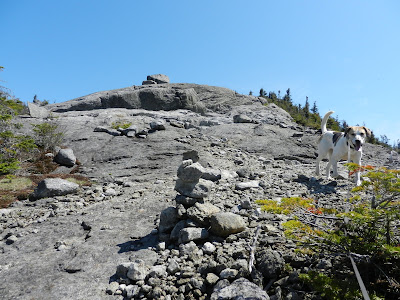 At the top of the rock you re-enter the trees.  The summit is in the trees.

We continued on to East Dix.  As we did so, we began to run into many groups of hikers.  We probably saw 10 different groups.  One group had 9 people.  Some of the groups we saw multiple times.  All of them were very nice.  We chatted with a nice man from Burlington, VT and a nice man named Jared from Syracuse.

The summit of East Dix is an exposed rock ledge with great views in 3 directions.  From there we retraced our steps back to South Dix.  A couple of steps from the summit was a rock cairn marking the herd path to Hough.  We took it and went over a false summit before coming down to a col between the false summit and Hough.  Here was a camping spot with a fire ring.  Immediately behind it was a small rock cairn and the Lillian Brook herd path.  That would be a descent route, but first we had to go up Hough.


We reached the summit of Hough at 2:30 and had the top to ourselves for 10 minutes before one of the groups caught back up to us.  Hough and Macomb both have small rock openings on the summit which afford views.  We then retraced our steps back down Hough to the col and camp site and began our descent down the Lillian Brook herd path.  We were a little worried about it because 2 different groups told us troubling things about it.  One group said it was hard to distinguish and follow, the other group said it was a really treacherous route.  Neither turned out to be the case.  It was a pleasant route.  The herd path was easy to follow and after a little while it came to Lillian Brook, which it then followed down.  A little ways down we came to a rock cairn marking a fork that goes to the col between Macomb and South Dix. 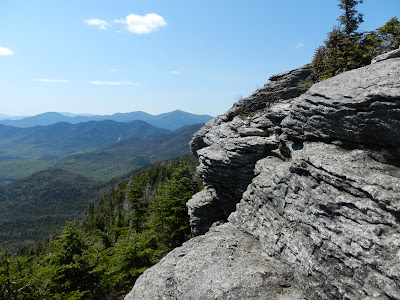 Once down the Lillian Brook herd path, we re-entered the Dix Trail and had about a 3.5 mile hike back to the car.  All-in-all a great day with great weather.

Edit:  9/10/12 - The brand new National Geographic High Peaks map shows the herd paths on the map.  This is new.  The previous version did not.